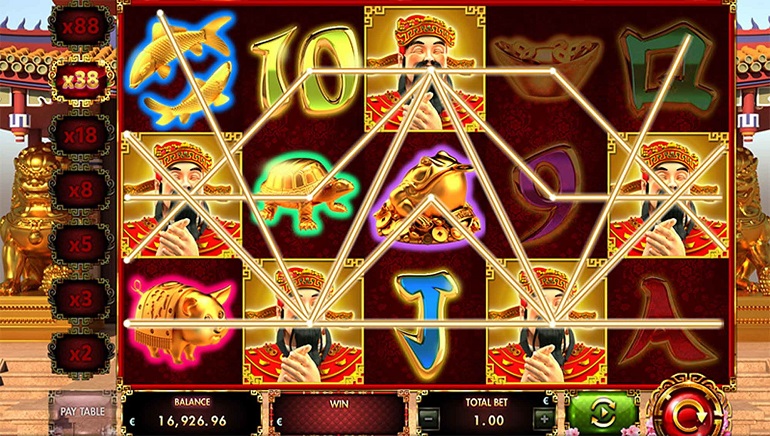 A maximum 4,352x multiplier and jackpot mini-game are just two of the key features included in Cai Shen 88, a Chinese-themed slot from Red Rake Gaming.

The new Cai Shen 88 slot developed by Red Rake Gaming is another title in the wave of releases inspired by Caishen, the Chinese god of wealth. In this take, Red Rake Gaming has built its release with a colourful collection of features and rewards.

Several playing cards are shown as base game symbols next to more rewarding trinkets, including fish, money trees, pigs, turtles, frogs, and coins. In order to win, three or more must line up from left to right over the 25 fixed paylines.

The allure of this mysterious slot hails from the competitive 95.30% return to play and a maximum possible win of 4,352x. When wagering, the total bet can begin at just €0.25 and be raised until reaching the upper threshold of €25.00.

Multipliers, Free Spins, and a Jackpot

Cai Shen is a wild character who can award players with lucky multipliers, ranging from lower values of 2x, 3x, 5x, and 8x to massive highs of 18x, 38x, and 88x. To win such a multiplier, Cai Shen must be landed as a contributing wild symbol in a winning payline. The corresponding multiplier will then be determined at random.

Four different types of free spins can be obtained from a golden spinning wheel. The result could be the awarding of four, eight, 15, or 25 free spins that are complemented by varying multipliers. To enter Lucky Roulette and win free spins, three or more money trees need to be landed in view.

A Chinese Lanterns mini-game has been added with the potential to win up to 1,000x times the current stake. Players should notice this as an alternative option to free spins after obtaining three money trees. There are three levels of jackpot to include Minor, Major, and Grand, which is the biggest.