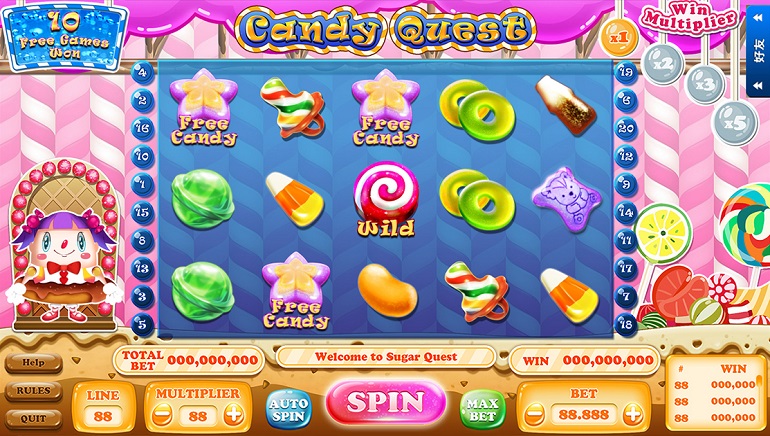 Candy Quest is a new slot game aimed at the Asian market. Released by XIN Gaming, it features cascading reels and a free spins round.

XIN Gaming have announced the release of their latest slot, Candy Quest, which is primarily aimed at the Asian market. It's another step towards XIN Gaming's goal of launching around 20 new titles this year, and has some features that are new to this developer's portfolio.

This 5 reel, 20 payline game is presented in vivid shades of pink and blue for an immediate visual appeal. Colourful candies fill the reels and the main feature of the game occurs when players line up 3 or more of the same for a win. The first prize is paid out, and then symbols that made up the winning combination will disappear, leaving spaces for other symbols to fall down into.

Should this new mix of candies produce another winning line, the process repeats itself and a multiplier kicks in to reward players with progressively bigger and bigger prizes. Other features include a free spins round which has an even richer multiplier in place throughout.

Called 'Cascading Reels' it's a new innovation for XIN Gaming, and their Chief Executive Officer Mathias Larsson has said ''This is our first game with the cascading feature and we are very happy with the outcome. The candy theme is a very funny one and we hope that players will smile when they see the game and fall in love with it.''

Based in The Philippines, XIN Gaming produce their own games as well as titles for other companies and provide an integrated platform for online casinos to run on. They develop slots and table games such as Roulette, as well as Video Poker social games and more, with a focus on players from Asia. A recent expansion of their range has seen Candy Quest being the latest of several releases so far in 2016, with the Highroller and Sky Guardians slots, plus Deuces Wild and Bonus Deuces Wild Video Poker also launched.