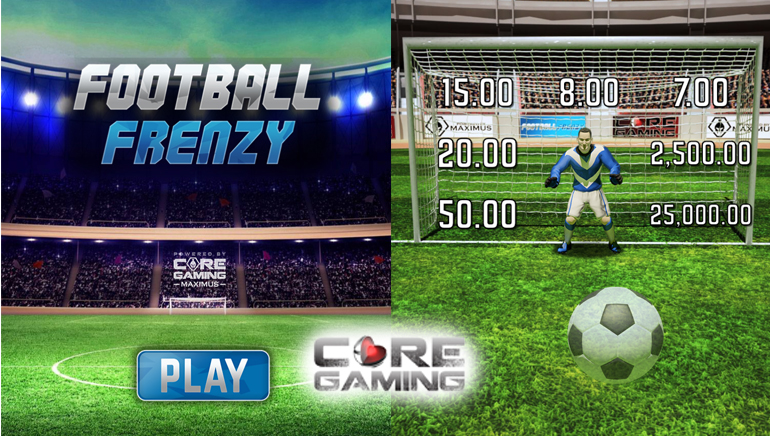 Football Frenzy is a brand new instant game at Sky Vegas. Players can win up to £250,000 with a single turn.

Euro 2016 is only a few weeks away and Sky Vegas is making early preparations before the tournament begins. From May, registered users will get a specially themed game entitled Football Frenzy. With time to kill ahead of the action beginning, Sky Vegas Casino players can turn to this new instant game as a source of entertainment.

Software developer CORE Gaming is responsible for creating Football Frenzy, which is designed as a bagatelle-style instant game. For clarity, what this means is that a ball is dropped at the top of a slanted table in the hope of landing it an area to earn points. The alternative is to reach the bottom and end up with none.

In implementing bagatelle within the modern age, CORE Gaming has designed Football Frenzy to take place on a pitch. The game then begins by dropping the ball downwards, with two teams of players to act as obstacles.

The first of the positive outcomes are the free kick spots, which will give players a complimentary turn. However, the more appealing option is to end up in the winning area at the bottom middle of the pitch. Alternatively, players can end up in one of the two miss areas on either side and win nothing.

When wagering, players can start with the £1 minimum and have the chance to win up to £25,000 with a single turn. Meanwhile, those who wager the £10 maximum will have a shot to win up to £250,000 on their turn. However, players will need to score into a final net before they can unlock the winnings.

Football Frenzy is the latest release from Core Gaming, a casino software provider responsible for creating more than 150 games across an array of categories. The company also ensures multiplatform releases through simultaneous launches to desktop and mobile.