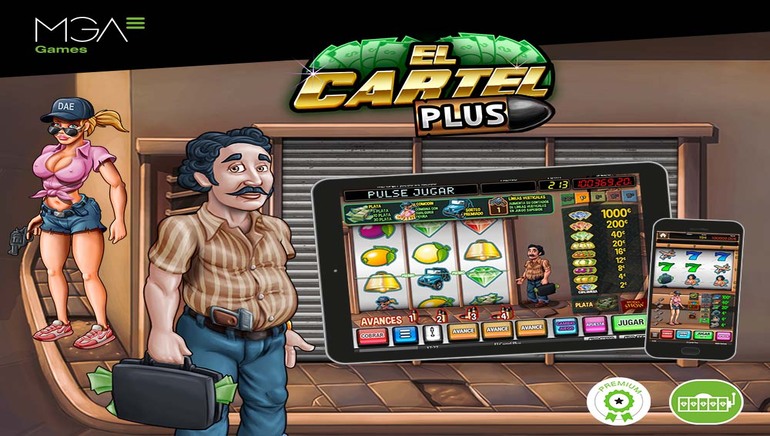 El Cartel Plus (The Cartel Plus) is already a big hit with the Spanish online casino market. Produced by MGA Games, El Cartel Plus takes players on a rip-roaring ride through one of the most dangerous faux organized crime syndicates. It's a tale of forensics, drug runners, and the DEA on this edge-of-your-seat action adventure.

El Cartel Plus by MGA Games is a sizzling-hot sensation. Now available to the Spanish online casino market, this premium game is upgraded with more firepower, contraband, and winning potential. The latest rendition – Plus – features top-tier mobile technology. Back in 2017, the first version – El Cartel - launched to rapturous applause. The original remains wildly popular to this day.

The Spanish market is particularly impressed by the quality of the slot machine game. In 2021, El Cartel ranked among the top 5 ranked MGA Games. The latest rendition, El Cartel Plus, is expected to top that and hit new records. This new slot machine game features three spinning reels of riveting entertainment.

It's a battle royale between law enforcement in LATAM neighbourhoods and drug smugglers. The action flows thick and fast, through the jungles of Latin America, to the urban metropolis. Plus, players get to delve into four mini games replete with prizes and lots of generous rewards. There are loads of crime fiction scenes on screen.

Among others, players will be thrust into Hollywood-style action milieus, including jeeps chock-a-block full of suspicious packages in the middle of the jungles of Central America, non-descript planes flying beneath the radar transporting unknown cargo to cartel members, illicit warehouses with shady deals and happening nightclubs where illegal transactions are taking place throughout the night.

Anyone who loves crime boss-style entertainment and the lavish lifestyle these Spanish mobsters live will thoroughly enjoy the feature-rich symbols in this game. There are stacks of cash, six shooters, planes and jeeps, and so much more. The excitement hits fever pitch levels in double-quick time, and this latest version of the hugely popular series is mobile responsive. The game downloads instantly and is perfectly suited to meet player expectations on every level.

MGA Games released this top-tier game to Spanish players on Monday, June 20, 2022. Players have this game squarely in their crosshairs – it's an instant hit with action fans. There are multiple 4WD vehicles, bizarre package airdrops, private planes, and an assortment of characters vying for the upper hand. It's a tour de force in slots gaming, and the backstory is entertaining.

MGA Games features as a global leader in the iGaming sector. The company designs and develops a large selection of games tailored to individual markets. As one of the premier games providers to online casinos across Spain, MGA Games boasts a dominant presence across Latin America and many European markets.

The company stems from MGA's New Technologies Division, with two decades of experience in the competitive gaming industry. As a market-leading entity in iGaming, the company has won awards for innovation in the gaming arena. MGA Games is a company with many different productions and offers 100+ titles in its diversified portfolio.