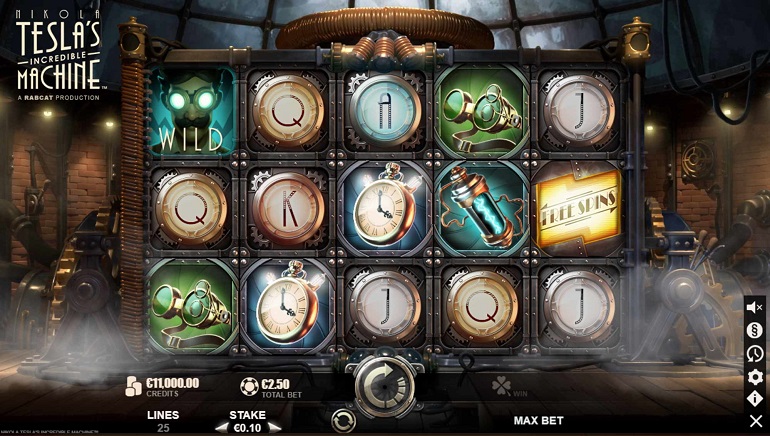 Nikola Tesla’s Incredible Machine by Yggdrasil is igniting a firestorm of interest from players around the world. This live-wire slot machine game from Rabcat and Yggdrasil plays out on a 3 x 5-reel grid with plenty of crackling features!

World-class online gaming creator Yggdrasil Gaming is no stranger to smash-hit video slot games. The latest such release is the electrifying slot game, Nikola Tesla's Incredible Machine. This game features a 3 x 5-reel format which is sure to jolt players in a big way. The game takes place in Tesla's factory. This genius scientist has an IQ off the charts, and he reveals just how smart he is with the Incredible Machine.

This engaging video slot game showcases chain reaction wins, and many unique in-game symbols designed to add high-voltage action to players’ gaming sessions. There is plenty of electrical and mechanical machinery in the factory, with Nikola Tesla scurrying about as he fine tunes his Incredible Machine. This energy-infused online slot game is not for the faint of heart, it's got enough volts to raise the roof, and then some.

The high-voltage features can be turned into exploding wilds, wild substitution symbols, or reel clones. Developed in tandem with YGS Masters (invitation-only gaming platform), Nikola Tesla's Incredible Machine brings the best of Yggdrasil’s gaming prowess to the screen. Over the past 12 months, Yggdrasil has teamed up with multiple gaming studios, including Fantasma Games, Northern Lights, AvatarUX, Dreamtech Gaming, Rabcat and 4ThePlayer. These partnerships have proven fruitful with world-class games now available to players everywhere.

In May 2019, Yggdrasil unleashed Niagara Falls slot game – its breakout YGS Masters title. This throwback slot game was inspired by all the ritz and glitz of the 1930s, with players able to enjoy many unique features, rewards and multipliers. The latest YGS Masters title – Nikola Tesla's Incredible Machine – is widely regarded as an immersive experience for players, and a welcome addition to the YGS Masters portfolio of games.