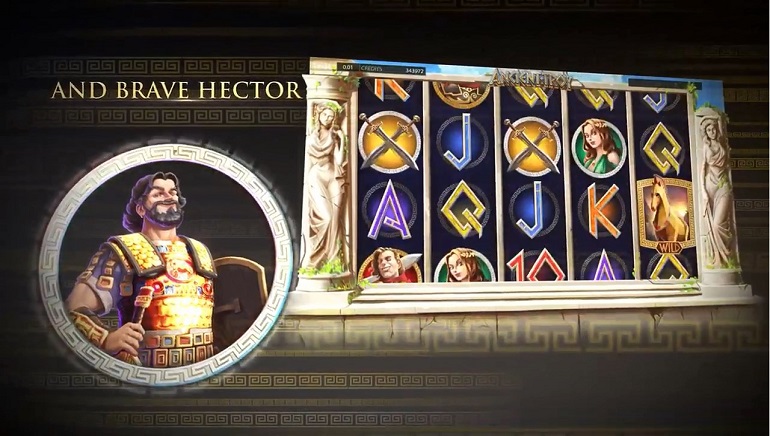 Take a step back into history with the new Ancient Troy slot, which is playable on smartphones and desktop devices at Endorphina casinos from last month.

Endorphina Gaming has followed up past release Minotaurus by returning to the times of Ancient Greece for the brand new Ancient Troy slot. This time, Endorphina will explore the legendary conflict that featured Greek heroes such as Achilles and Hector, who fought one another because of the affair between Helen and Paris.

Ancient Troy has been designed with a colourful cartoon background that depicts Greek architecture within the city state of Troy. Having been created for the HTML5 infrastructure, this makes it possible for Ancient Troy to be compatible over an array of desktop, tablet, and smartphone operating systems, such as Windows, Apple, and Android.

Five reels and three rows of 15 symbols have been used in the game, which offers the ability to earn winnings from matching images on 25 adjustable paylines. Playing cards and battle gear are used for the less valuable symbols, which are not quite so useful compared to Achilles, Helen, Paris, and the bonus symbols.

The Trojan horse that fooled the people of Troy and granted the Spartans entry to the city is used as a wild symbol that can trigger a 1,000x multiplier when five are matched on a payline. This special symbol can fill in for every missing symbol except for the Troy scatter.

The Troy scatter is a mighty symbol that can trigger a 5,000x multiplier for matching five on the same payline. Three or more will even provide 10 free games and unleash two stacked Troy Jokers for every single spin.

Ancient Troy also has a risk game that lets players gamble their winnings to try and earn double. This can be performed up to ten times with consecutive wins. The aim of the risk game is to pick one of the four cards facing down and find one that is higher than the dealer’s.