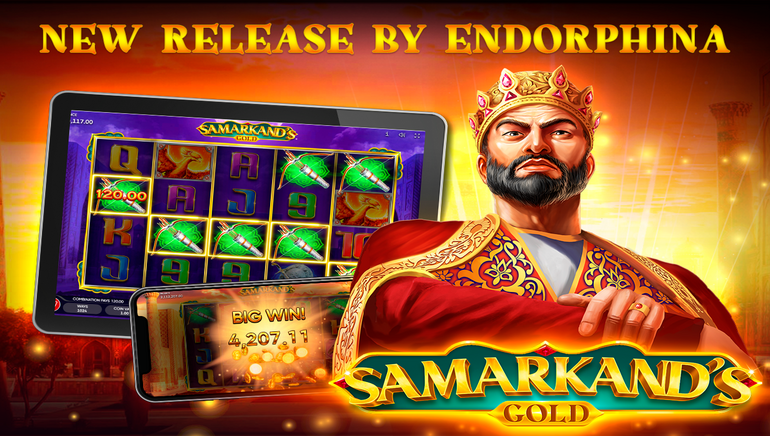 Endorphina is leading the way as one of the world's most popular B2B online slot game providers. This top-tier iGaming developer has ignited a firestorm of interest among players with its latest ritzy slot game.

Samarkand's Gold is a majestic adventure fashioned by leading software provider, Endorphina. Many hidden treasures are revealed as players travel a mystical path through ancient worlds. These include the glittering Samarkand's Gold medallion, the Phoenix rising from the ashes, the stallion, and the golden palace, to name but a few. It's a bon voyage to intrepid adventurers in this 5X4 reel slot with 1024 ways to win. Set against a regal purple night sky, Samarkand's Gold sparkles with plenty of fanfare.

Trade routes are located in this mesmerising ancient Asian city. They reflect the past of what once kept this city alive. Samarkand's Gold lion protects treasures hidden deep in the overbearing granite mountains. Players must locate this sacred animal to restore hope to the masses and win back the marvellous ancient city. Which player will be the luckiest? What number of winning ways will players unearth? These are the burning questions of the moment.

Endorphina's latest bristling adventure features a 5-reel and 4-row slot format. Samarkand's Gold has 1024 fixed payment options in play. Except for the Scatter symbols, the matching symbols can be located at any position on adjacent spinning reels. They should start from the leftmost reel and progress to the rightmost reel. The longest route through all symbols of a specific type generates a payout. Each matching symbol on a reel creates a unique way to win. Players can win on multiple win lines - 1024 ways to win. Regular symbol wins and Scatter wins are also added to payline winnings.

The symbols players will see on the reels are the Glorious King Samarkand's Golden City, the Wild, and Endorphina's stunning Lion, which moves as a bold Scatter. Free Games with Wild multipliers are triggered when there are three or more SCATTER symbols. 3, 4, or 5 SCATTER symbols can trigger the 8, 15, and 20 free games, respectively. During free games, players can win free games over and over again. But that's not all – the Classic Risk Game allows players to double their winnings ten times. This game also offers a Bonus Pop.

What It Feels like to Play Samarkand's Gold Slot

This ancient Asian slot takes players on a rip-roaring adventure through time. The Warriors are brave, noble, and fearless. Swords and shields, bows and arrows, and plenty of gold coin pepper the scene. The King is all-powerful, and he cuts of fine form on the reels. The reels spin effortlessly, and when winning combinations appear, the game comes to life In stunning 3D. The audio-visual elements are tweaked to perfection, with cutting-edge tech taking care of the action.