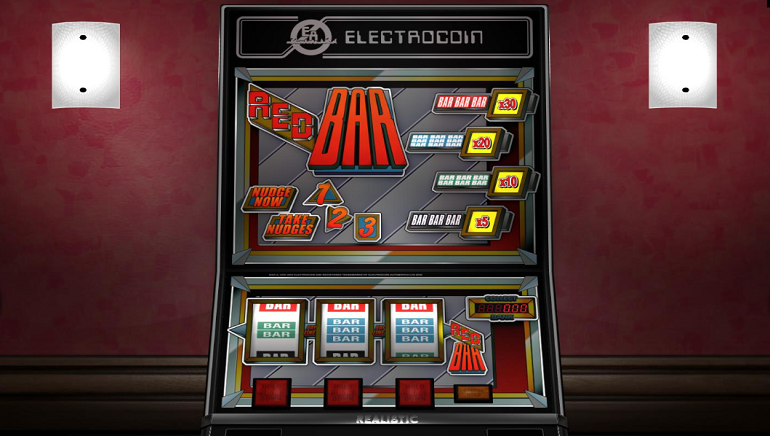 Red Bar is the latest slot from Electrocoin to be converted to online format by Realistic Games. It's the 11th in a hugely popular series.

Realistic Games has revealed the last in its hugely popular range of online conversions of Electrocoin slots. Red Bar is a classic 3-reel, 1-line game filled with colourful BAR emblems. The design incorporates a WebGL 3D cabinet against the red backdrop of a casino wall, to enhance the impression that players are spinning the reels of a physical slot. Authentic sound effects and animations also feature in this traditional game.

Realism From Realistic Games And Electrocoin

This is a medium volatility game with multiple low stakes options. Bonus features of the Red Bar slots game include respins on winning combinations, nudging symbols, and the option to hold symbols for a win. Players can also select from 3 jackpot values, winning up to 150x the total stake.

Red Bar is the eleventh title in the series and joins hits such as Bar-X™, Super Bar-X™ and Bar-X™ 7even at desktop and mobile casinos featuring the Realistic Games range. It's available now, and is sure to match the popularity of others in the series.

Robert Lee, Commercial Director at Realistic Games, said: “Red Bar completes a fantastic collection of original land-based games that have become staples of Realistic’s portfolio over the last six months, achieving a stickiness that is often hard to gain. The level of retention the series has experienced is testament to the reputation of Electrocoin’s slots and also the talent of Realistic’s studio.”

Gabino Stergides, President of Electrocoin, said: “Together with the Electrocoin team, Realistic’s brief was to make sure that these iconic games would live on in the digital era and could be enjoyed by online players for years to come. Our games have such longevity that they continue to attract new audiences almost four decades after they were first released and it is a source of great pride to see them meticulously recreated in the online environment.”