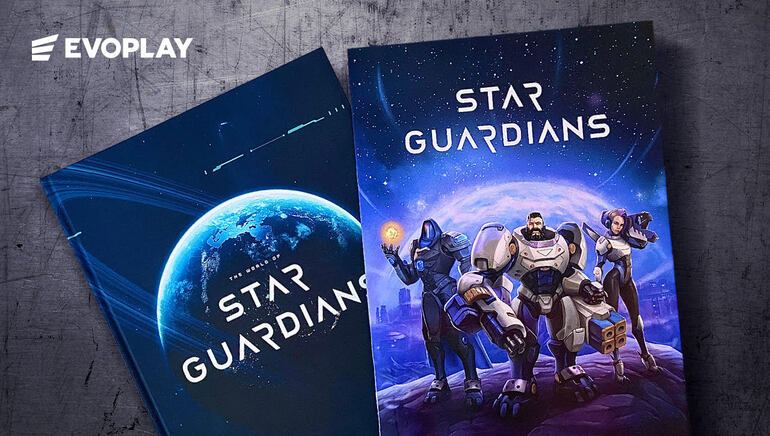 Evoplay has just broken new ground with the iGaming industry’s first-ever Comic Book and Artbook to go along with its signature slots game Star Guardians. Players can easily access all of these amazing resources directly from the Evoplay site.

Welcome to the World of Star Guardians

Evoplay holds the official mantle of the first game development studio to launch a Comic Book and Artbook for a slot machine game. Both the Comic Book and the Artbook are freely accessible directly from Evoplay’s website. The digital comic book is quite the attraction, featuring multiple videos about each of the characters in Star Guardians Special Forces. These include Keliot, Joe Butcher, and of course Skyler.

The Comic Book is a 28-page introduction to an out-of-this-world experience. It tells the story of human suffering and resistance against a common enemy – the Tritons. These alien lifeforms came from Planet Triton, and they have waged war for 5 long years. Of course, it was the Guardians who rebuffed their efforts and played a pivotal role in securing a future for humanity. The founders of the Star Guardians include Keliot, Skyler, and Joe Butcher. They have no fear because the cause they fight for is bigger than themselves – it's about the survival of humankind.

The Comic Book is divided up into several parts:

Each Guardian is unique, with strengths and skills that perfectly complement other guardians to present a bulwark against the marauding alien forces. When these three guardians combine their talents, skills, and fighting abilities they become known as the Star Guardians – the last hope for humanity.

Star Guardians tells the story of human existence from an entirely different time and place. It's a planet set hundreds of years in the future in the year 2777. It details all of the monumental challenges facing humanity at that time, after a massive and unprecedented invasion by alien creatures. Following 5 tumultuous years that have decimated the planet, a handful of battle-hardened guardians remain. Each of these warriors created a special forces team known as Star Guardians. Each of them has a different story to tell and share with online casino players.

Despite their differences, the Star Guardians are united in their opposition to the extra-dimensional creatures. According to lore, 2777 was the first time in humanity's history that an interplanetary war was waged. And so begins an immersive experience that completely transforms the slots gaming universe for players. Expertly-crafted graphics and amazing detail bring the story to life for seasoned veterans of the gaming scene and newcomers alike.

The Artbook is available in two parts. These include Part One which discusses the unfolding events as recounted by a survivor of a futuristic space war. The survivor warns of the impending disaster facing the population of planet Earth. This serves as the perfect intro to the world of Star Guardians. In Part Two of the Artbook, it's all business. This section provides unique information regarding the game itself. It's all about the developmental processes, the creative elements, and the importance of Star Guardians to online casino operators across the world.

The 72 page Artbook showcases 4 chapters, including the following:

Evoplay has created a multi-faceted world, rich with in-depth character development. The World of Star Guardians is the next frontier in iGaming for players. Each of the characters in the game is uniquely qualified to be there. Based on the Comic Book, there are plenty of backstories to better understand how these characters fit into the big picture. This enhances the authenticity of the experience for fans of The World of Star Guardians. Players can reference each character's trials and tribulations, to better understand how they got to be Star Guardians.

Industry leaders have lauded Evoplay for its innovative approach to iGaming. Speaking on behalf of the company, Ivan Kravchuk Evoplay CEO and SBC Leader of the Year 2021 had this to say, ‘In the wake of the hugely successful launch of Star Guardians, we have developed an Artbook and Comic Book to provide more details on the storyline and bring its fantastic story to life…We hope that the digital artwork does a lot to fill players and operators in on the futuristic universe that Star Guardians is set in, as well as the intricate background that each character possesses. Truly great games stand the test of the time – and we’re so proud to see Star Guardians outperforming even our most galactic expectations.'