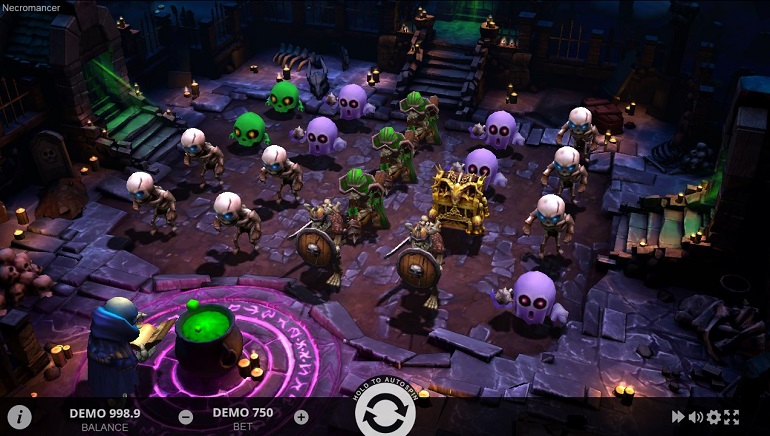 Necromancer is a brand new VR slot that is now playable at Evoplay casinos, with compatibility widespread across multiple devices.

Evoplay Entertainment has taken a groundbreaking set forward by releasing the virtual reality (VR) slot Necromancer, with potentially more to follow. From this point forward, the brand new Necromancer VR slot shall be playable over at Evoplay casinos.

Players shall now be able to experience immersive 3D gaming by sampling Necromancer on a number of compatible devices. For starters, a desktop device can be paired with a VR headset to play Necromancer in full VR. Alternatively, iOS and Android handsets can be worn as a more cost-effective way of playing the game.

The Practice of Necromancy

Legend has it that a necromancer is a wizard who specialises in the practice of necromancy, which is a dark form of magic that entails the conjuring of dead spirits. Despite the dark subject matter, Evoplay has kept the Necromancer slot light in tone by developing the game with colourful graphics.

The slot interface is one that is looked down, with the 3D graphics showing lines of monsters assembled as a horde that has been gathered by the Necromancer. Essentially, though, the slot works as if it has five reels and four rows, albeit with a different viewing angle when compared to non-VR slots.

Necromancer shows a vertical angle to players, but the perspective can be shifted due to the VR design. Ultimately, Evoplay has allowed for VR players to shift the camera around by a full 360 degrees, with each angle providing a new perspective of the 40 paylines.

When delving into the special features, players will find that they can receive a single re-spin following every single win that occurs. This will result in the Necromancer sacrificing the winning symbol. In turn, this causes that symbol to appear in greater numbers for when the re-spin is performed by the Necromancer.

Evoplay has also designed the Necromancer slot to integrate free spins among the special features. This works in a similar way to re-spins, but this time a randomly chosen symbol is now sacrificed before returning in much larger numbers. Of course, there will also be higher quantity of free spins compared to the single re-spins.