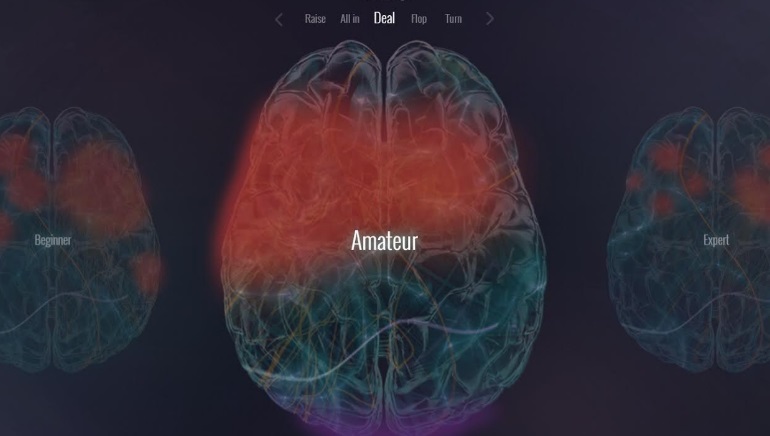 Behind every poker face there is a poker brain, and that might be more complex than it sounds. A new study conducted by behavioral research consultancy SimpleUsability has checked the inner workings of players' minds as they played online poker, and the results include some interesting findings.

The study was conducted among six online poker player of three different skill-tiers: Two experts, two intermediates and two beginners. The players' emotional and cognitive states were measured using EEG (Electroencephalography) headsets which were used in conjunction with advanced analysis software, as they were playing Texas Hold 'Em.

By monitoring players' brain waves, the device is able to record different emotional and cognitive states: Frustration, engagement and excitement. The players were placed in a comfortable environment to resemble their standard home setting where they play online poker, and the gameplay sessions ranged from 35 to 40 minutes.

The more experienced players turned out to be bored while playing only at one table, what prompted them to open more tables as they played. Levels of excitement increased when the expert players' turns came simultaneously at the multiple tables. At the same time, an intermediate player was frustrated when he played two tables and had to make a decision at the same time – all players who played on multiple tables were frustrated when they were folded and awaiting their next turn.

Excitement peaks were observed in all players at certain situations. One of the beginners reached a peak at the first instance when he was required to decide whether to call or fold; the other beginner's excitement level peaked when the winner of the first hand he played was revealed – even with the fact that it wasn't the player who won. A universal increase in excitement was registered when players won (as opposed to frustration when losing), and when players raised and called when other players at the table had raised.

Online poker beginners show a tendency to become agitated during different plays of the game, something that may lead them to ditch logical thinking: The study strongly advices to stay focused and abstain from "automatic" responses, like when deciding to commit oneself to a hand on a Turn card that is sometimes unjustly held as an insignificant part of the game.

At the same time, players should steer clear of playing on multiple tables unless they genuinely feel ready – and even then, their perception might be far from the concrete reality and their skills. Multi-table gameplay is for the experienced players only, those not fit for its demand might find themselves not only frustrated but with painful hits on their bankroll.

The Science of Online Gambling

This research joins other studies which suggest that online gambling and poker are good for players' brains in the long run. The brain is given good training by the need to recall cards, resort to mathematical calculations and think strategically.

Some have suggested that this mental workout not only increases brainpower so-to-say, but also possess the potential to decrease the chances of Alzheimer disease development, prevent dementia and so on. Some have also suggested that different forms of online gambling can be great for stress reduction – only in healthy doses and with safety measures, of course.

It is also interesting to see how researchers are drawn to online gambling and its science – something that can be a testament to its growing popularity, alongside the millions of players at popular online poker rooms the likes of 888 Poker and Winner Poker.

The First Ever Gaming Show Taking Place in Cyprus in September

Eventus International to Host Shows in Montenegro and Scandinavia