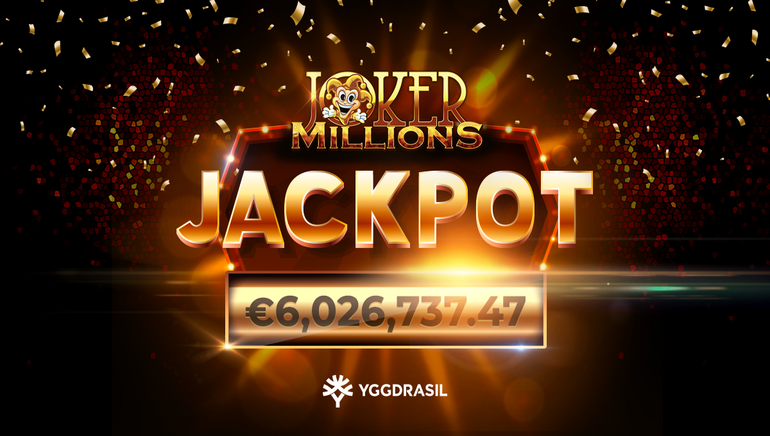 A lucky player won the Joker Millions progressive jackpot worth more than €6 million playing on mobile at NordicBet Casino.

2022 started on a positive note for a lucky player from Finland who won a fortune playing Yggdrasil’s Joker Millions. The progressive jackpot slot worth more than €6 million was won at NordicBet Casino. This is by far the biggest amount won this year, and it serves as a source of inspiration for fellow slots enthusiasts. The game is available at many online casinos, and it is pooled among these operators, so it is prone to setting records.

Joker Millions is one of the most popular progressive jackpot games produced by the prestigious software developer. Over the years it has made many millionaires and in 2021 alone lucky players won nearly €40 million. The latest winner walked away with a life-changing amount on January 2 when he won precisely €6,026,737. This is a huge amount by any standards and one of the biggest payouts ever claimed by someone playing this game.

Joker Millions is a mobile-friendly slot and not surprisingly, the winner decided to spin its reels on a mobile device. The decision proved to be correct because a few spins after he started the gaming session, the coveted jackpot was hit. The winner decided to keep his identity private, which is something that makes perfect sense. NordicBet Casino complied with the request, so fellow slots enthusiasts can only cheer at the success of their counterpart from Finland.

Other Progressive Jackpots Waiting to be Won

Joker Millions is not the only progressive jackpot slot in Yggdrasil’s online portfolio, so players have many other worthy options. Holmes and the Stolen Stones, Empire Fortune, Ozwin’s Jackpots, Dr. Fortuno, Jackpot Raiders, Jackpot Express, Frost Queen Jackpots, and Atlantean GigaRise are equally tempting alternatives. These are also mobile-friendly games, so punters don’t have to make any compromises and can gamble on their devices of choice.

The recent win was announced by Stuart McCarthy, Head of Products & Programs at Yggdrasil who congratulated the winner. Joker Millions was the first progressive jackpot slot released by the company and apparently, it is still immensely popular with online audiences. The fact that somebody won more than €6 million will provide others with a strong incentive to give it a chance. NordicBet is a part of the Betsson Group so Paul Malt, the Head of Games and Studio for the company congratulated the winner.