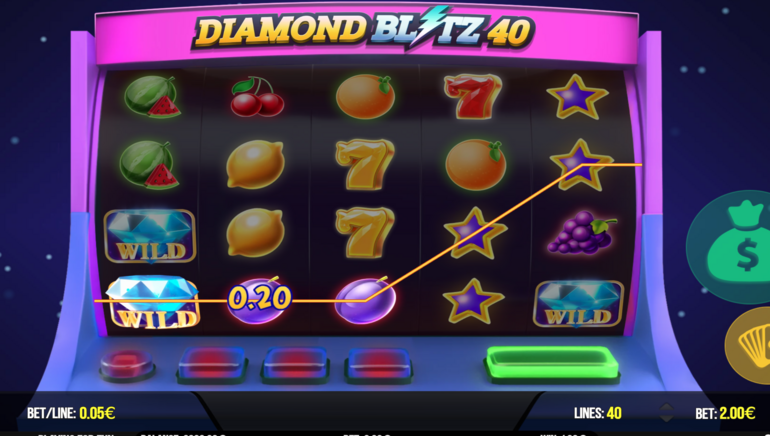 FUGASO has released Diamond Blitz 40, a modern video slot inspired by a classic, with immersive mechanics and a high return to the player more than 95%

FUGASO had a great 2021, with plenty of new releases added to its amazing portfolio. The software developer intends to make this year even better and 2022 started on a positive note. Diamond Blitz 40 is the first game launched, on January 26 and it sets the bar high for future releases. Inspired by a beloved classic, the new slot has exciting game mechanics and offers the promise of big potential winnings.

Slots fans who enjoy classic games will be impressed by what Diamond Blitz 40 has to offer. The game looks very similar to a standard arcade, with simple but enjoyable graphics. It has four rows, five reels, and a total of 40 lines, with many winning combinations. Whenever players strike a big win, it is celebrated by immersive animations that help mark the occasion.

The regular symbols depict fruits, which is appropriate for a game that wants to celebrate the classics. Bar symbols and stars are also present to spice things up and 7s are also a pleasant sight. Not surprisingly, players are more excited about the prospect of discovering wild symbols which are depicted by diamonds. They can replace other symbols on the reels and create more winning combinations. Players can also boost their winnings with scatters which are depicted by yellow bells.

Fugaso wanted to create a game that pays tribute to the classic slots. This meant that it couldn’t offer too many special game mechanics and exotic features. The one that stands out from the crowd is the Gamble Feature which allows players to double profits up to five times. After scoring a win, you have the option of picking a red or black card and doubling your profits. You can follow through with this action five times if you feel lucky, so there’s the promise of really big wins.

Diamond Blitz 40 has a 95.05% return to player which is above the industry average. This makes it a good choice for casual and recreational punters, who also appreciate the low betting limits of $.40. The slot has medium volatility and a hit rate of 20%, so it checks all the important boxes. You can try the new slot from Fugaso on desktop computers or mobile devices, as it was developed in HTML 5.