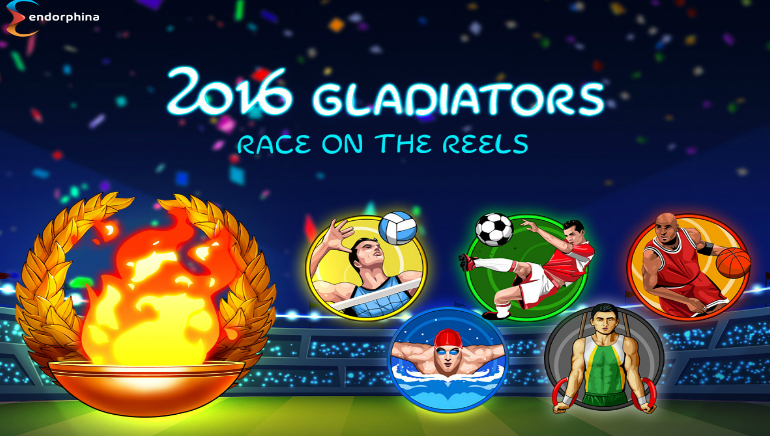 Endorphina has an impressive track record when it comes to developing great looking and well-paying video slots. The news that a brand-new game will hit casinos soon, sent shockwaves across the entire community of online players.

This video slot spent a long time in the making, as developers wanted to make sure it exceeds expectations. 2016 Gladiators celebrates the Olympics spirit and pays tribute to the athletes participating in the Modern Olympic Games.

Get in the Mood for the Rio Olympics

2016 Gladiators is not about the fighters of ancient Rome as the name might suggest. It celebrates a different type of gladiator, one that fights on stadiums, alone or alongside teammates. Everyone can chase the Olympic gold and feel like a winner, without actually leaving the comfort of their home. The game invites players to take a virtual trip to Rio de Janeiro to be part of the Olympic Games.

Players are right to be optimistic about the latest Endorphina slot. Past performance suggests that in the wake of a new game being released, casinos launch promotions to celebrating its arrival. 2016 Gladiators has the potential of becoming the best game of the year and is the perfect tribute for the Olympic Games.

The team of highly trained professionals working for the software developer has produced many gems over the last couple of years. The enthusiasm produced by the release of a new game is under these circumstances, well justified. 2016 Gladiators is not the only game that players are anxiously waiting for to be released internationally. They are equally enthusiastic about the upcoming Twerk slot, with its beautiful design and authentic atmosphere, dedicated to the fine art of derriere dancing that became quite popular in recent years.