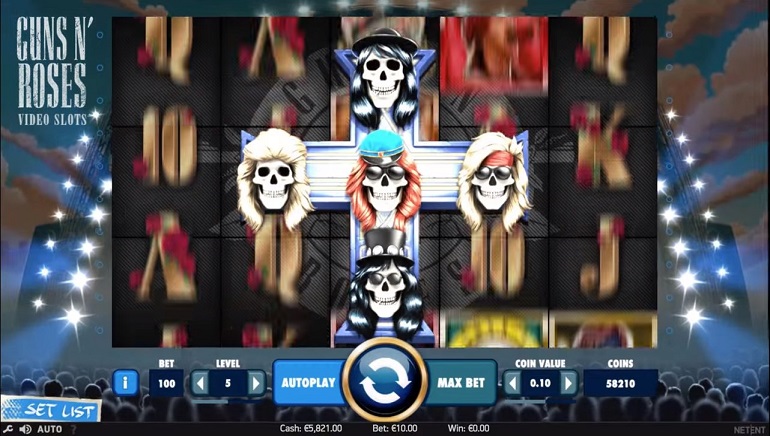 NetEnt is preparing to shake the online casino industry by launching an official Guns N’ Roses slot in January 2016. Discover more in this preview.

NetEnt and Universal have combined for yet another monumental partnership that is set to rock the online casino industry to its very core. Following the release of Dracula and Frankenstein as video slots, NetEnt and Universal are next going to launch a Guns N’ Roses slot. At present, the slot is slated for a 21 January release in early 2016 at NetEnt Casinos like Tivoli Casino, LeoVegas Casino, and Real Deal Bet Casino.

A Year in the Making

There has been a great deal of anticipation for the Guns N’ Roses slot, which was announced as far back as January 2015. Of course, the reason for the popularity is because Guns N’ Roses is a world-renowned band after enjoying major success in the 1980s and 1990s. The band is best-known for releasing enormous singles like Welcome to the Jungle, Sweet Child O’ Mine, and Paradise City.

Information has been extremely tough to come by since the Guns N’ Roses slot was first announced. NetEnt unveiled an early promo video featuring officially licensed images and music, but nothing was given away in terms of gameplay. In fact, it took until November 2015 until a gameplay video was released to NetEnt’s official YouTube channel. After watching the video many times, OCR can confirm that NetEnt is primed for another hit already.

What to Expect from Guns N’ Roses

NetEnt has designed the slot interface to sit in front of a brightly sit stage with blue sky and white clouds in the background. These visuals are ideal for framing an interface built with five reels and three rows, which will give players 15 symbols on the screen at any one time. From a design standpoint, the symbols depict the band members, guitar plectrums, and logos – all of which look impressive.

At this stage, it is still difficult to know exactly what special features will be included. However, it can be confirmed that Guns N’ Roses will be released on the NetEnt Touch mobile platform. This will let players enjoy the slot on smartphone or tablet when it soon emerges at NetEnt casinos like Tivoli Casino, LeoVegas Casino, and Real Deal Bet Casino.