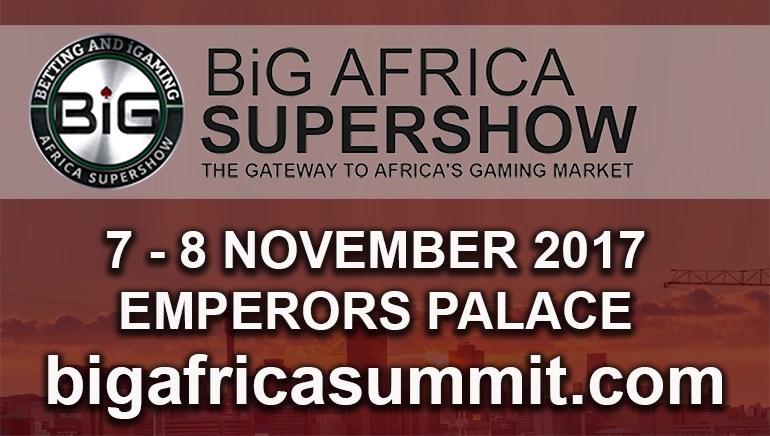 On 7th and 8th November 2017, the BiG Africa Supershow iGaming conference is being held at the Emperor's Palace in Johannesburg, South Africa.

The BiG Africa Supershow is the largest iGaming summit on the continent, and this years event is being held at the Emperor's Palace in Johannesburg, South Africa on the 7th and 8th of November.

It's an opportunity to meet industry players, software providers, regulators, and to network with others, while an awards ceremony will recognise the best speakers, sponsors and exhibitors.

What's On At The Show

This is the 5th annual BiG Africa Supershow, and it's the largest yet, with 30 guest speakers across 15 seminars, and an exhibition featuring game and software developers from around the world.

Speakers come from across the iGaming industry and they include representatives from Africa's biggest sports betting operations. Craig Venter from Clickabet, Martin Sack from SunBet and Betting World's Dean Finder are among them. Regulatory boards and gaming associations are well represented, with the list of speakers including Tyrone Dobbin of the Western Cape Bookmakers Association, Simon Mogapi from the North West Gambling Board and Professor Ntshengedzeni Alfred Nevhutanda from the National Lotteries Commission.

A rich variety of exhibitors will be in attendance, with Betconstruct, Evolution Gaming, The South African Responsible Gambling Foundation and Betdata being a few examples.

Some of the seminars will cover different opportunities within the African iGaming market, including how to take advantage of the rise of Bitcoins, crowdfunding, esports and advice on starting a gambling operation in the region. Other seminars will deal with anti-fraud measures, sports integrity and churn prevention.

There's five BiG Africa awards, with the Lion prize going to the best speaker, the Rhino going to the longest supporter of the event, and the Leopard prize for the best exhibition stand, while the most competitive company gets the Buffalo award and the biggest contributor wins the Elephant prize.

Interested parties can still register via the BiG Africa Supershow website and join the most important event of the year on 7th and 8th November.