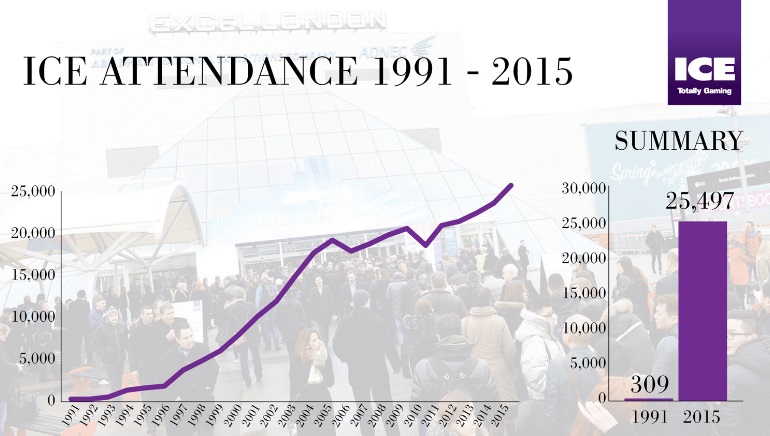 A record-breaking 25,497 attended ICE Totally Gaming 2015, an annual conference bringing together professionals, operators, and developers from the global igaming industry. After crunching the numbers, organisers were able to reveal that attendance has increased 8% from the 2014 event. Compared to 2013, the increase was a substantial 13%.

The global nature of the event was highlighted by the fact that 59% of all attendees came from outside the UK. At a closer glance, Germany was the top country in the international visitors’ table. A little further behind was the US, where Nevada, New Jersey, and Delaware now have legal igaming markets.

There was a substantial rise in the international visitors table for Asia, with attendees increasing 41% on 2014. Latin American visitors also increased, but the growth was a more modest rise of 9%. These figures highly that ICE is on track to diversify to an even greater extent in 2016.

15% Increase in US Visitors

In-depth statistics from the event provide an eye-opening revelation in that Austria is the only country from the top 10 featured in the visitors’ table that actually decreased on 2014. Many of the countries actually saw double-digit growth on their 2014 attendance, with Bulgaria rising dramatically by 53%. Organisers will also be pleased to see a 15% increase from the US.

The increased international diversity was highlighted by a fall in the proportion of UK attendees on 2014. UK attendees still accounted for the highest proportion at 10,717, but their diminished share of 41% is clear evidence of the international success of ICE Totally Gaming 2015. Organisers will aim to surpass 25,500 visitors in 2016.

For this year’s event, ICE was relocated to the ExCeL Centre. The purpose-built venue is situated within close proximity to Canary Wharf. The decision proved to be a wise one, especially considering that ICE is in its 21st year and needs to remain relevant, which it has certainly achieved.