iSoftBet Unleashes A Jumbo Stampede With Their Latest Slot 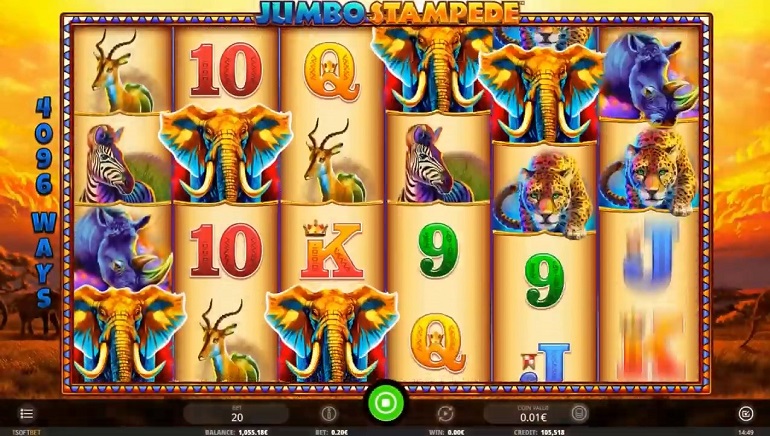 Following a period of exclusivity at GVC casinos, the Jumbo Stampede slot game has now been launched across online and mobile casinos sites that feature iSoftBet games.

With herds of African animals trekking across the 5 reels and lining up over the 4096 ways to win, it's a game that offers players the chance to land some mammoth prizes.

To fit 4096 different ways to win across the game, iSoftBet have given it 6 reels and 4 rows of symbols. While standard playing card icons return the lower-value prizes, a virtual zoo of African wildlife pays out the higher awards when they land across the reels.

Tigers, gazelles, zebras and rhinos can appear, but the top-paying animal is a magnificent elephant. All the animal symbols are  in a realistic style and the whole game plays out against the dramatic backdrop of a herd of elephants.

The setting sun is a wild symbol, able to act as wild animals, or playing card icons to complete combinations.

A special golden elephant is the scatter symbol, which triggers anything from 8 to 50 free spins, depending on how many landed at once. Players are treated to wild multiplier symbols during the bonus round, while elephants pay in any places, not just when landing on adjacent reels.

iSoftBet games are developed in HTML5 to be mobile and desktop compatible and players can spin these beautiful reels from just 0.20, to a maximum stake of 20.00. Jumbo Stampede is a medium-volatility game with average returns of 95.94%

Michael Probert, Chief Commercial Officer at iSoftBet, said: “After an extremely successful exclusivity period with GVC, we are delighted to be able to offer Jumbo Stampede to the wider market.''

''With exciting bonus features and a thrilling game pattern that classic slot players will love, Jumbo Stampede is set to become one of our best games to date.”