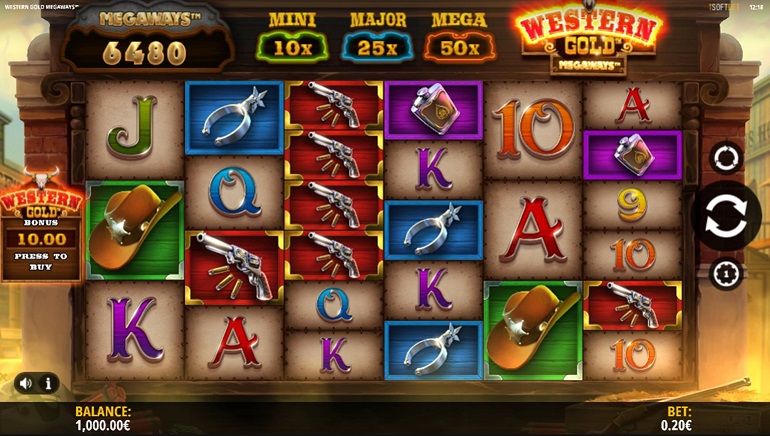 Western Gold Megaways Slot game has rolled into town. This Wild West style slot is packed with winning features, including the Mini, Major, and Mega jackpots. Players with a penchant for dusty old towns, tumbleweed, and six-shooters are in for a real treat with Western Gold Megaways slot machine game.

Created by iSoftBet, Western Gold Megaways delivers fun-filled entertainment from the very first spin. This video slot game release follows hot on the heels of a successful run-of-form with various operators. Top brands including 10cric, SoftSwiss, Betsson, and Stoiximan had exclusive access to Western Gold Megaways prior to its wide release on the iSoftBet network.

Set in Frontier Town, Western Gold Megaways is a fast-paced thrill ride. The game features authentic six-shooters, spurs, Gold Sherriff badges, Steers, and 9, 10, J, Q, K, and A symbols. With cascading wins at the ready, and a treasure trove of ‘Max Megaways’ modifiers, players can trigger wins at any time. Western Gold Megaways features 117,649 ways to win, and plenty of cascading prizes on the reels.

The Sherriff’s Badge is Boss on the Reels

As part of the hugely successful Aztec Gold series of slots, Western Gold is the #6 Megaways slot game released by iSoftBet this year. When players land 5+ Sheriffs Badge icons on the reels, the Western Gold Cash Respins feature kicks into high gear. During this round of play, slots fans can win a fistful of dollars in cash prizes, or land one of 3 jackpots. These include the Mini, Major, and Mega Jackpots.

As soon as players land additional scatter symbols on the reels, respins automatically reset. As soon as a whole reel is filled with Sherrif Badge symbols, then the values on the reel will be multiplied by the total number of symbols on that reel to generate mega wins. With Western Gold Megaways, players get to traverse the badlands in pursuit of riches beyond their wildest dreams. The Hold and Win bonus round provides players with plenty of incentives to win big in this cowboy-style adventure.