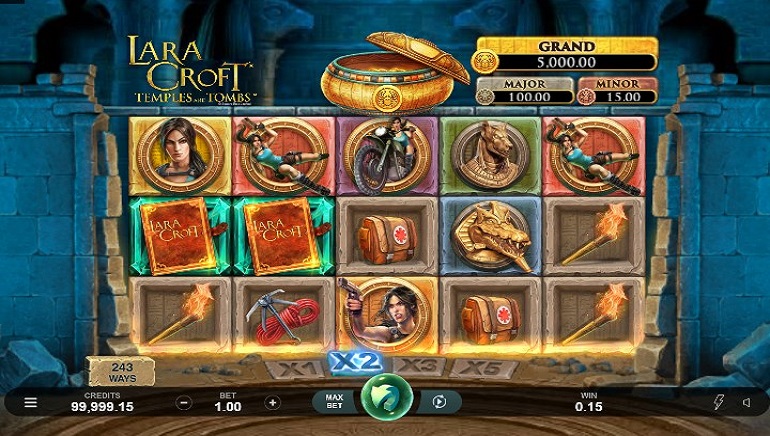 Lara Croft is embarking on a new slot adventure from Microgaming and Triple Edge Studios in Lara Croft: Temples and Tombs.

Microgaming has finally released the highly anticipated new Lara Croft: Temples and Tombs slot. From mid-May 2019, players can visit participating Microgaming casinos and embark on their own quest to uncover relics and treasure on globetrotting adventures.

Lara Croft: Temples and Tombs represents an evolutionary step forward compared to past entries in the series, including 1996 slot Tomb Raider and 2008 sequel Tomb Raider: Secret of the Sword. Visual standards have improved significantly in the form of the Lara Croft slot.

Microgaming development partner Triple Edge Studios has handled the production of Lara Croft, with the game being made with five reels and three rows. Wagering then starts at €0.20 and typically increases up to €20.00, depending on the casino.

Lara Croft: Temples and Tombs appears to have found inspiration from the Gonzo’s Quest slot developed by NetEnt. This is due to Lara Croft using falling symbols that crumble away when matched across adjacent reels for winnings.

Any symbols that crumble away are then filled by new symbols that drop in from above. If players can go on a streak of wins, then the on-screen Multiplier Trail can increase through 1x, 2x, 3x, and 5x. In Lara Croft, there are 243 different ways of winning.

Wild symbols can support by plugging gaps in adjacent reels two, three, and four. By gathering up wilds through the Rolling Reels feature, players will have a greater chance of triggering the Golden Scarab Jackpot feature, which comprises Minor, Major, and Grand tiers.

Free spins are awarded only when players are able to discover three Lara Croft book symbols. Each way triggered will lead to eight free spins being provided to players. At this point, the Multiplier Trail will increase to display 3x, 6x, 9x, and 15x instead of the lower amounts shown previously.