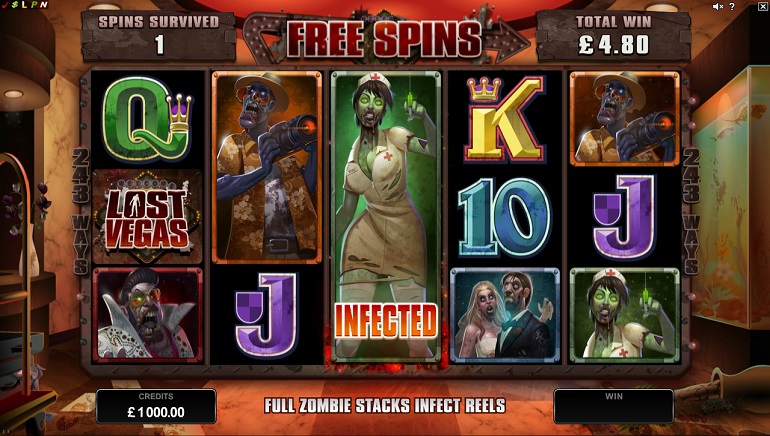 Lost Vegas is the latest slot from Microgaming and it sees a zombie apocolypse hit the Vegas strip.

Lost Vegas is an infectious slot from Microgaming that sees hordes of zombies attacking the human survivors through the street of Vegas. With 5 reels and the popular 243 Ways to Win system, this game lets players choose which side they want to be on, while great visuals, random bonus features in the base game and a free spins round that has real bite should guarantee it's success.

With a backdrop of a deserted casino, Lost Vegas sees the city overrun by characters like an undead Elvis, dancer and medic, while the unfortunate survivors include a barmaid, mobster and club girl. After any non-winning spin it's possible for the Zombie Fist Of Cash to appear, with a rotting hand clutching a reward making an appearance, while another randomly triggered feature is the Blackout Bonus where zombies or survivors can trigger extra payouts.

Players can decide if they want to be among the living or the undead, with different free spins bonus features in play for each mode. In Survivor mode, the Stash feature sees low value symbols snatched away to uncover a bonus payout, with the free spins continuing until all of them have been removed.

Zombie mode players will get to enjoy an Infection feature, where stacked zombie symbols will remain on the reels with the spins continuing until the whole game is turned into them. This can take up to 50 free spins to achieve.

Lost Vegas is released on desktop and mobile formats and players can expect to see it at sites such as Royal Vegas Casino, Euro Palace Casino and Platinum Play Casino.

Commenting on the new release, Neill Whyte, Commercial Director at Microgaming said “Lost Vegas is a perfectly timed game for Halloween,” adding that “This slot brings so much entertainment to gameplay, from being able to pick a side and play as a Survivor or Zombie, to the never-seen-before features in the free spin rounds. We are really excited to see this slot launch, and I’m sure that the game will not only be popular upon release, but will be a long-term favourite with players.”