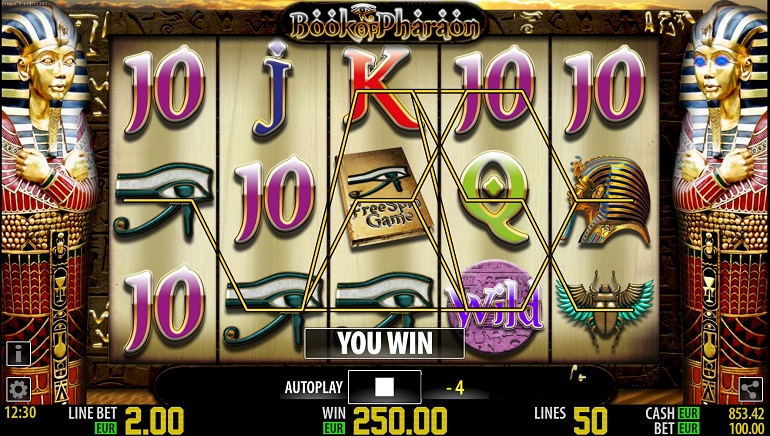 Massive jackpot claimed by lucky player at Goldbet, and it's another Ancient-Egyptian themed adventure slot game!

Summer is winding down with a big smile for a lucky player on the WorldMatch video slot game, Book of Pharaon HD. The mobile version of this popular video slot game by WorldMatch enjoys a huge following in Italy. The player struck gold at Goldbet, an authorized casino under the auspices of the Italian gaming regulator (ADM).

The WorldMatch slot game features 5 reels and 50 pay lines. The spinning reels are flanked on either side by Tutankhamen mummies, and symbols on the reels include scarabs, the Eye of Ra, 10, Jack, Queen, King and Ace symbols. Book of Pharaon HD also features a bonus game, multiplier scatter symbol, free spins, and a wild symbol. The lucky player enjoyed this game on a mobile device, when he won €344,431.62.

Book of Pharaon HD already enjoys cult-like status with fans, in the relatively short time since its release. It sports an ancient Egyptian theme, and a variety of immersive features. Among them are the free spins game where players can enjoy up to 100 free spins. Feature-rich graphics, haunting sounds, and detailed backdrops make this a must-play attraction. The quality of the mobile game version is indistinguishable from the desktop version. Cross-platform functionality ensures a seamless experience throughout.

Book of Pharaon HD slot by WorldMatch also offers a unique feature where players can continue where they left off, even if they switch to different devices in different gaming sessions. The huge jackpot win was recently confirmed by WorldMatch after it was paid out. The state-owned concession company, Goldbet.com verified the win.

The executive director of WorldMatch had this to say about the recent win: ‘In addition to the classic theme, that of ancient Egypt, which has always met the player’s preferences, the strengths of the slots are the fascinating features that it has, such as the free spin game which gives the player the chance to win up to 100 free spins. The gaming experience is further enriched by high-definition graphics and theme sounds.’