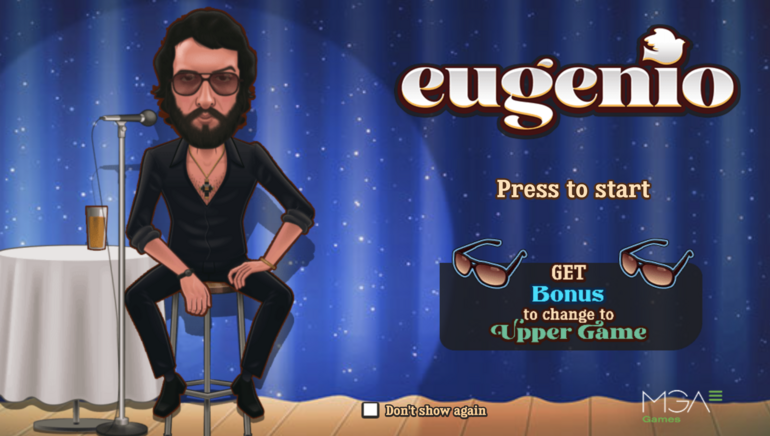 MGA Games’ latest release in the Spanish Celebrities series is the Eugenio slot, paying tribute to the immensely entertaining comedian from Catalunya.

MGA Games is back in the spotlight with a new slot that is dedicated to one of the Spanish Celebrities. Eugenio is a famous Catalan comedian that can bring a smile to the faces of people attending his shows. Not surprisingly, the Spanish software developer decided to celebrate his achievements in a new game with a high return to the player. The slot was released in late April and can be found at all the casinos featuring their games, from the Spanish Celebrities' families.

Winning is so much Fun

Nothing is guaranteed to bring a smile to the faces of people spinning the reels of slots than a high RTP game. MGA Games’ Eugenio makes this kind of proposition to punters who enjoy a high-paying game with cool visuals and fun animations. If you love hilarious stories, then you will surely appreciate the excitement that this new game brings to the table. The comedian from Catalunya is known for his absurd humour and the ability to keep a serious face while everyone is bursting with laughter.

The software developer brilliantly succeeded and capturing the very essence of his shows, while delivering a game that appeals to both veterans and casual punters. It faithfully recreates Eugenio’s comic routine and stays true to character, so it is particularly appealing to those who have seen his live shows. The symbols populating the reels are in complete accord with the overall theme, and the protagonist is dressed in black and has a glass in one hand, just like he does on stage.

There is more than meets the eye about this beautiful game and punters spinning the reels of MGA Games’ Eugenio can expect big payouts. The slot has three reels and five mini-games, with minimum betting amounts of as little as €.20. This is perfect for casual and recreational punters who have just discovered the excitement of online slots. Veterans and high rollers will appreciate the fact that the maximum amount that can be wagered is €15.

If you believe that the game is only as good as the maximum return on investment, Eugenio is not a slot that will disappoint you. That’s because you can win a maximum of €15,000, corresponding to a top wager. Punters who feel comfortable betting larger amounts for a chance to win equally impressive payouts will surely appreciate this opportunity. Everyone is expected to enjoy the time spent spinning the reels and we look forward to the next MGA Games released in the Spanish Celebrities series.