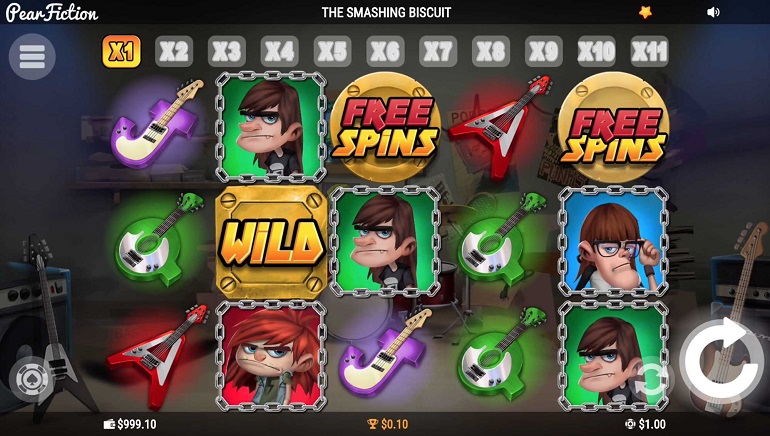 PearFiction Studios has partnered with Microgaming to release The Smashing Biscuit slot game - a punk rock ensemble. This 5 x 3-reel slot game plays out on 20 lines of amplified fun with three cartoon rockers entertaining the crowds.

Microgaming Introduces the World to The Smashing Biscuit

The game introduces slot machine players to three band members. Their grungy appearance and punk-rock style mirrors the musical score players will enjoy throughout the game. Electric guitars are pervasive and the game offers a selection of in-game bonuses and features such as free spins and wild symbols. Affordably crafted, The Smashing Biscuit comes with a minimum coin size of 0.01 and a maximum coin size of 1.00. With autoplay functionality in effect, multiplier symbols and bonus games, The Smashing Biscuit is crafted to be a showstopper.

The stars of the rock band include Tiny, Crunchy and Soggy. These characters play their hearts out during the game, as an entertaining selection of in-game features and audio-visuals unfold. There are a series of unique features in play, including a multiplier ladder and three unique random Dad Bonuses. Players will note the multiplier meter rising and falling as the three rockers perform for the crowds. The random Dad Bonus is triggered by Mr. Biscuit. This brings various elements into play such as the multiplier dial and instant wins. Players also get to enjoy a uniquely-themed Battle of the Bands free spins mode.

The 4 x 3 playing grid in The Smashing Biscuit dovetails with a selection of free spin symbols. Once a Biscuit brother makes up a winning line, he will be locked in place as a wild until the conclusion of the Free Spins round. The game ratchets up a notch when all three brothers are transformed into wilds. That’s when things heat up and players get to experience a complete selection of intuitive gaming elements and a truly interactive session of slots play.