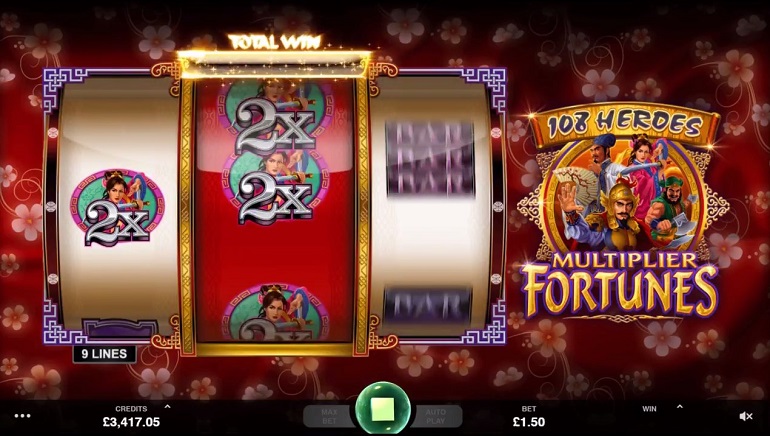 Gamers can join with 108 Heroes in a legendary new slot that will be released to Microgaming casinos next week.

Microgaming has announced the forthcoming release of an epic new slot from 6 September 2017. From that date, players can visit Microgaming casinos to seek their fortune in the 108 Heroes Multiplier Fortunes slot, which draws from the incredible legends told from the days of Ancient China.

108 Heroes Multiplier Fortune has been created based on an ancient Chinese novel called the Water Margin, which was first circulated in the 14th century. A cast of legendary Chinese will feature often in the slot symbols, and these are also complemented by flowery images, Bars, 7s, and numbered multipliers that can deliver plentiful winnings.

Microgaming has designed 108 Heroes as a compact slot game with only three reels, meaning that the game can easily appear on the smaller dimensions of smartphones. That much is clear from the display of a smartphone device in the YouTube trailer. On top of the three reels, players can win using nine paylines.

Another key choice has been the assigning of a high 96.50% return to player percentage, which is used to determine the winning potential. Meanwhile, 108 Heroes also offers a competitive jackpot where players can trigger a maximum multiplier worth up to 2,100x the base stake. At the minimum, players can stake 0.15 or more on up to 15 coins.

108 Heroes has also been fitted with wild symbol special features. These can be triggered by the wild symbols and their ability to initiate a re-spin with two or more wilds appearing on the second reel. The second reel will stay locked and a 10x multiplier can be awarded. Wilds will also act as substitute symbols.

The release of 108 Heroes Multiplier Fortunes will appeal to players who appreciate history and visually impressive designs. Any players wishing to experience the slot can find it at Microgaming casinos from 6 September.