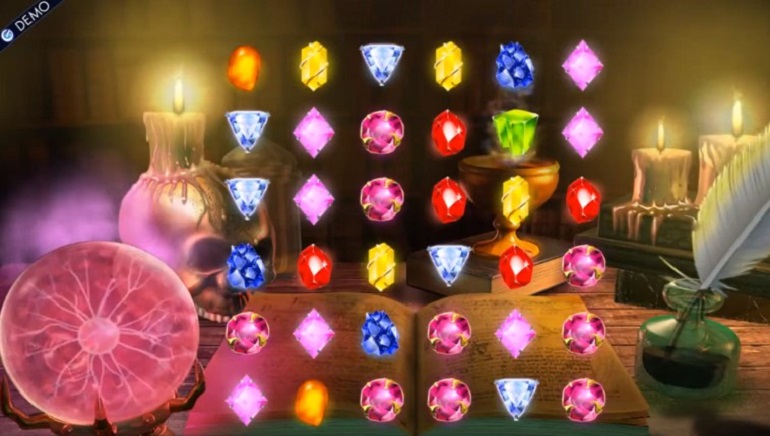 The Wizarding World Of Mysterious Gems

Sparkling jewels fall down a 6x6 grid in Mysterious Gems, which is set in a wizards' lair, where candles flicker and a strange orb glows to one side of the game. Matching gems will disappear to be replaced by others cascading down from above, while a special expanding wild symbol helps in the task, substituting for others to complete winlines.

Random awards of 2x to 5x the total stake are paid out when the Amethyst lands anywhere on reel 4, and the Mysterious Jade symbol on reel 5 causes all wins on the reels to be paid out at the highest value visible gem. The Sapphire will award a multiplier of up to 5x to any win on the reels, while any mix of these gems means that all features apply at once.

There's also a free spins game where up to 50 spins will play out, and wins during this round can be multiplied by up to 15x if a series of symbol cascades occurs one after another.

Love is in the air as players spin the 5 anime-inspired reels of Singles Day. Based around the annual Chinese celebration that's become an online shopping event, this slot has a huge 100 paylines and symbols of young, unattached women and the items they want to buy, such as handbags, shoes and jewellery.

Any wild ice cream sundae's will expand across a reel to assist in completing winlines, and if 2 or 3 wilds appear in a single spin, 10 or 20 free spin bonus games are triggered.

Throughout these free games, each of the young women will become a Super Symbol, filling up to 4 entire reels for the potential of some huge payouts of up to 3,750x the total bet. An image of all 4 women together becomes a Super Wild that can also fill anything from a 2x2 to a 4x3 block on the reels.