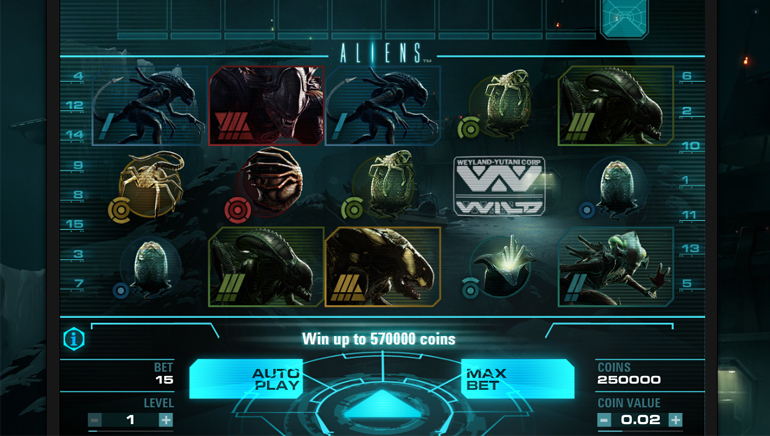 Online casino software developer Net Entertainment has released AliensTM, a highly anticipated video slot which was announced February this year, one of the company's big releases for 2014. The game is based the second installment of the popular "Alien" sci-fi movie series directed by James Cameron and featuring Sigourney Weaver as Ellen Ripley who fights her extraterrestrial foes.

AliensTM is built of 5-reels, 3-rows and 15-paylines which set the scene for potentially huge wins. The video slot employs real-time 3D graphics displayed via a first-person view from a marine's helmet camera. This is set to submerse the players straight into the action as they fight their way through waves of aliens to reach the Queen Hive where a huge bonus is lurking. The game mixes between the traditional video slot experience and that which you would have experienced while playing a modern-day 3D first-person shooter, shedding light on why NetEnt was dubbed "Innovator of the Year" at this year's IGA Awards.

The slot's symbols consist of the franchise's different aliens including the Weyland Yutani Corp wild which can appear anywhere on reels 2-5 in level 1 and anywhere in level 2, substituting other symbols to max out wins. During gameplay, players go through a complete storyline beginning in "The Search", over to "The Encounter" and ending in "The Hive". The first level has players scan the premises for alien activity and the more multipliers they earn, the bigger the award they receive on the next level, where they fight off alien hordes and ammunition is scarce. The third level pits players against the alien queen, featuring a four-step battle with a maximum prize of x240 per the player's bet.

Most Exciting Themed-Casino Games of 2014