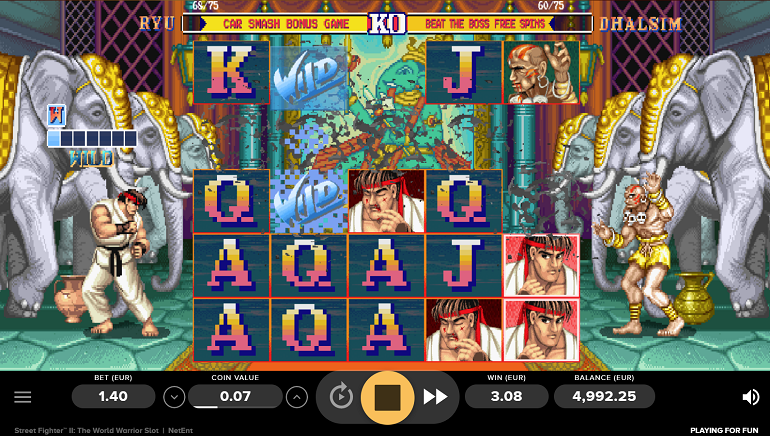 NetEnt's new Street Fighter II: The World Warrior slot brings the popular fighting arcade from the early 90's back to life in a unique and entertaining way.

NetEnt has done it again! The company that's become famous for taking classic movies and reintroducing them to the general public via unique slots has just launched another game that players have been anxiously awaiting. This time around, it is a remake of an iconic fighting arcade originally released in 1991 under the now-famous title Street Fighter II: The World Warrior.

NetEnt has certainly taken a big challenge when they announced they were developing the Street Fighter II: The World Warrior slot. Taking up one of the most famous games in its genre and turning it into an entertaining slot while still staying true to the original feel of the arcade was no small undertaking. Players' expectations were big.

But, as expected, the company has done a great job at it. Offering eight well-known characters players can choose from at the start of each game ("round"), the slot manages to bring back the memories of the game that forever changed the genre of fighting arcades.

Taking a number of original elements from the game, from character design and special moves, over fighting locations, to music and sounds, Street Fighter II: The World Warrior slot does not disappoint.

It's not just the design that makes this game unique. NetEnt has gone a step further and envisioned the slot as a series of battles. At the start of a game, a player gets to select his or her character and they're pitched against a random opponent.

The slot features familiar cluster pay mechanics and creating winning combinations with symbols featuring fighting characters causes them to exchange punches. As this happens, health bars located above each of the character shrink.

Eventually, either the player defeats the opponent or they lose the battle. Losing the round triggers the "Car Smash" bonus feature while the victory unlocks the boss fight with progressive win multipliers.

If there is one thing that some players may not like about Street Fighter II: The World Warrior slot it's that rounds can take quite a while to complete. But for true fans of the original game, this will hardly be an issue.