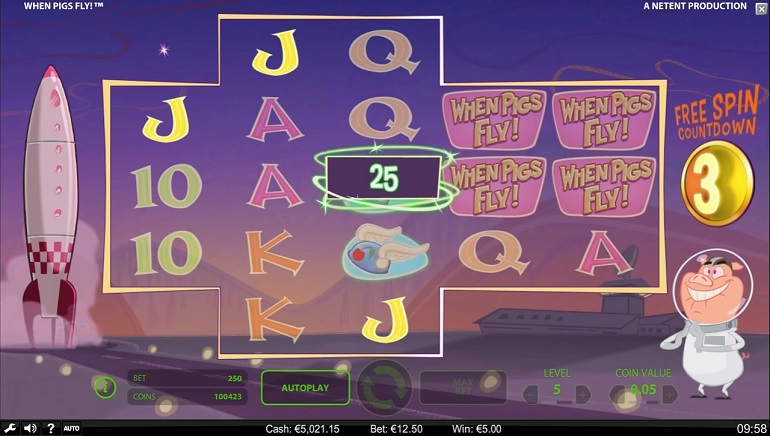 When Pigs Fly is a new slot coming to NetEnt casinos next week. Expect a cartoon-style experience with changeable reels and re-spins aplenty.

“When pigs fly” is a popular English idiom used by people who doubt that something is going to happen. Ironically, this is the title of a new NetEnt video slot that is slated for release next week. Despite the name, players can definitely expect this slot to appear at leading NetEnt sites such as Casino Cruise, Playamo Casino, and PunchBets Casino next week.

Footage of NetEnt’s When Pigs Fly slot first emerged on YouTube in early June, with players shown a strange experience quite unlike any other. For starters, the cartoon visuals hark back to the days of Ren & Stimpy in the ‘90s. So, perhaps some of the NetEnt’s visual artists were inspired by the popular cartoon.

More importantly, though, the footage shows a bizarre slot setup that has never been seen before from a major software developer. The five reels are what players are used to, but the numbers of symbols that can appear in each row seem to change. At times, some of the reels have five symbols, but then at others there can be one. By adopting a highly innovative, changeable style, NetEnt can include 3,125 ways of winning.

The changeable reel design is the principal feature of the game, and there is enough going that players do not need to look for side-game. After each win, players will see reels expand, with it possible to end up with a five by five grid of symbols.

Going back to the intro of the YouTube video, NetEnt shows that players have wild symbols and that they can win up to 480,000 coins. But the more important feature appears to be the re-spins. Each win will trigger a re-spin during gameplay, with each consecutive re-spin lowering a countdown. Aim for five consecutive re-spins and there will be eight free spins.