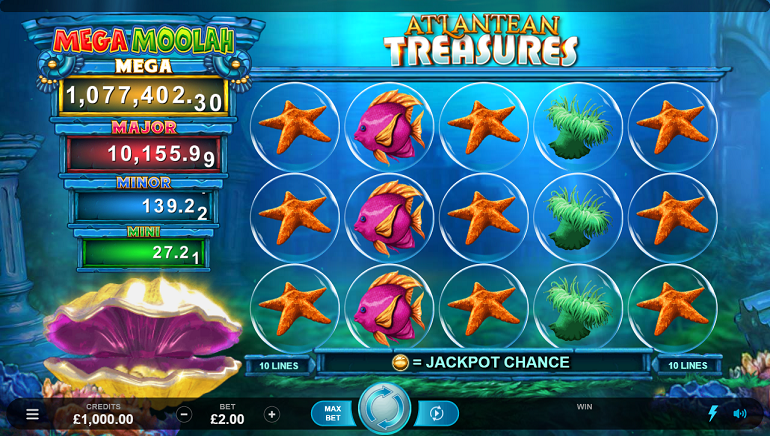 The lucky player managed to claim the Mega jackpot while spinning away at Mega Moolah: Atlantean Treasures, a slot that's been recently added to Microgaming's progressive network.

Microgaming has created another instant-millionaire thanks to its progressive Mega Moolah jackpot. The latest lucky winner joins the exclusive club of numerous Mega Moolah-made millionaires as the first player to score the main jackpot on the Atlantean Treasures slot. The game represents the latest addition to the progressive network and gives everyone a chance to chase the well-known progressive in a brand new environment.

The latest win happened on May 8 at River Belle Casino. The lucky player was spinning the reels of the Atlantean Treasures: Mega Moolah slot when they triggered the bonus round and proceeded to take home the main prize of €7,784,425.63.

Microgaming has one of the biggest and most-popular progressive jackpot networks featured at hundreds of online casinos. To date, the company has paid in excess of €1.1 billion in jackpot prizes alone and helped create many instant-millionaires. Like all big scores so far, this one will also be paid out to the lucky winner in one lump sum.

From African Savanna & Ancient Egypt to Lost City of Atlantis

Mega Moolah: Atlantean Treasures is the third slot in the Mega Moolah series. Released on February 25 and developed by Neon Valley Studios exclusively for Microgaming, the slot takes players on an underwater adventure situated in the fabled lost city.

Of course, the biggest pull of this slot is still its potential to produce massive wins through progressive jackpots. It seems the game was well-received by the players as it has awarded a total of 238,594 jackpots since its official launch. This number includes 45 Major jackpots and one Mega jackpot that was awarded on May 8.

Microgaming has been continuously working to ensure their Mega Moolah brand remains popular with the players. In addition to Atlantean Treasures, the company added another title to the series in May, named Absolootly Mad Mega Moolah.