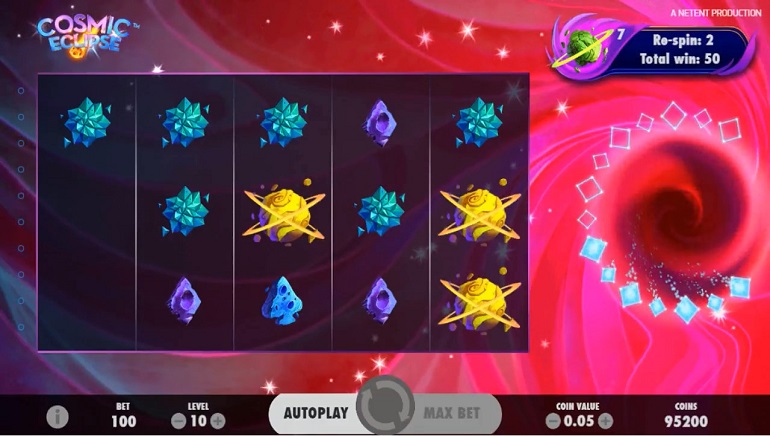 Cosmic Eclipse is a fairly simple 10-payline slot with nice graphics and an interesting bonus feature, which should make it worth a few spins.

We've seen quite a few new slots from a number of developers over the past few weeks. NetEnt was the only member of the group that failed to join the party - until a couple of days ago, that is. Released exclusively on Betsson Casino for the time being, NetEnt has come up with Cosmic Eclipse, a rather simple but entertaining slot.

A Lot of Fun Across 10 Lines

Unlike most slots we've been seeing recently, NetEnt has decided to return to the roots, releasing a game that features only 10 paylines. This fact, coupled with the space theme, makes Cosmic Fortune resemble their popular Starburst, but this slot is more entertaining and visually much more elaborate.

The game is set on a backdrop of what appears to be a black hole, ready to swallow anything that comes near it. Symbols on the reel are represented by several colorful planets and stylized playing card symbols, which resemble pieces of rocks originating from the said planets. Futuristic music playing in the background adds to the overall feel of the Cosmic Eclipse slot.

Keeping things fairly simple, NetEnt has designed their new slot with a single feature, named Black Hole. The feature is triggered when the bonus symbol, a purple black hole, lands anywhere on the last reel.

Once the feature is activated, one random symbol (except for wilds and bonus symbols) is selected and it becomes active. All active symbols are sucked into the black hole and a re-spin is awarded. If there are any active symbols or wilds on the re-spin, they are gathered as well and another re-spin follows.

This continues until a spin with no active symbols or wilds, or until 15 symbols are gathered. Then, all gathered symbols are distributed on the reels in a way that guarantees at least one win. After this, the feature ends and the slot returns to the base game.

Cosmic Eclipse isn't one of those slots that can be called revolutionary but it is bound to appeal to a decent number of players, especially the fans of good, old Starburst.