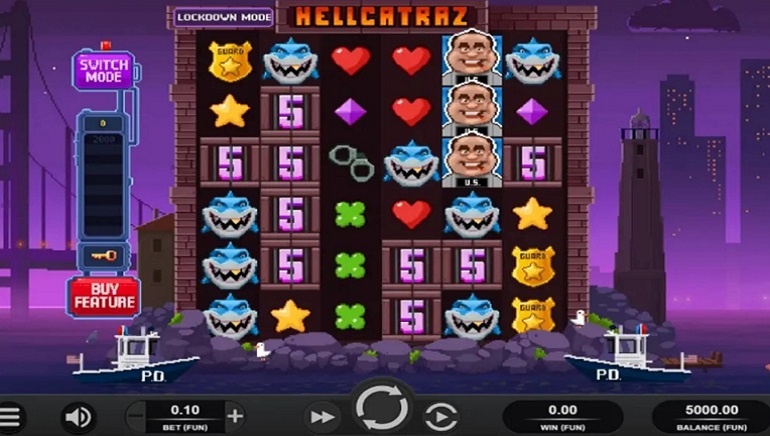 Relax Gaming has been one of the more active game developers lately, which helped the company significantly improve its market position. Their latest release named Hellcatraz represents an interesting slot that combines modern gameplay elements with pixelated graphics inspired by the 80s computer games, promising a different kind of adventure on the reels.

Computer graphics have come a long way and most games today feature sharp and detailed visuals that create a lifelike atmosphere. However, with their Hellcatraz slot, Relax Gaming decided to take a completely different route and create a game that takes players back in time to the period of pixelated, cartoonish graphics.

The slot is inspired by a prison-break theme so the reels feature symbols such as police officers, inmates, guard badges, and more. But, instead of crystal-clear pictures, players are given low resolution images and old soundtrack. This may not appeal to everyone, of course, but the game definitely offers an experience that's quite different to that found in most slots these days.

While the Hellcatraz slot may have the classic looks, it is definitely a modern game in every other sense. With a 6x6 grid and win-ways instead of traditional paylines, this slot has the potential to produce some really big wins.

Players can also choose between two different modes featuring different volatility levels. Thus, everyone can choose to play the game the way they prefer - with rare but bigger wins or with more frequent but smaller wins on average.

As they spin the reels, players will collect keys. These keys are used to trigger the bonus feature. It takes 2,000 keys to start the bonus but players can also buy the feature whenever they like at the full price of 200x the stake or at a discount based on the number of keys they collected up to that point. The feature kicks off with 5 spins initially but more spins can be won following successful cascade wins.