Play'n GO Takes on the World of Anime in its New Slot, Candy Island Princess 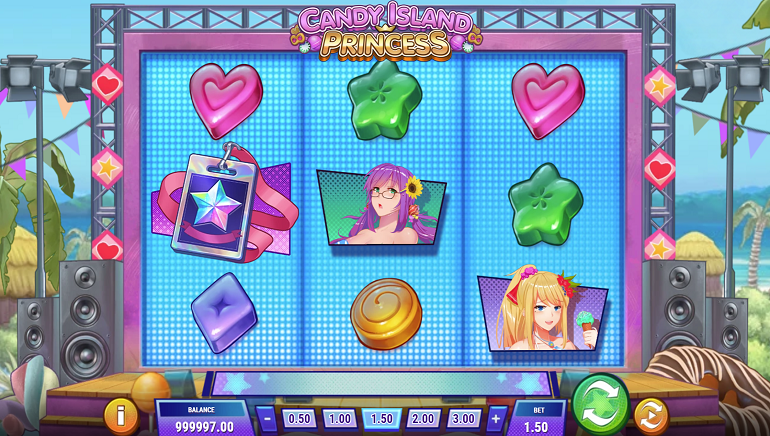 Candy Island Princess from Play'n GO is a strange foray into the world of anime. The slot itself is simple, in fact, it’s pretty much the same setup as a classic fruit machine, but the fruits have been replaced by candy and anime girls.

Candy Island Princess from Play’n GO is a strange foray into the world of anime, with 3 female contestants competing for the prize of being named Candy Island Princess. The slot itself is simple, in fact, it’s pretty much the same setup as a classic fruit machine, but the fruits have been replaced by candy and anime girls.

Despite the simplicity, there are some interesting features in this game, including the Candy Splash, Lucky Respin, Behind the Scenes, and Free Spins. Candy Island Princess can be played at Play’n GO online casinos.

Slot Specs
Candy Island Princess is a 3-reel, 5-line slot that’s playable on all devices. Bets range from as low as $.05 to $100. The slot is relatively low volatility and has a default RTP of 96.20%. There are 4 candy symbols, 3 game show contestants, a ticket scatter, and camera scatter on the reels. Wilds are a no-show in this game, but there are enough little features sprinkled throughout to make up for it.

When 3 of the same contestant symbols line up on the reels, the Candy Splash feature is triggered and the symbols expand to pay out on all 5 paylines.

When 3 camera scatters land on the reels, the Behind the Scenes feature is triggered. The feature has the potential to dole out some big rewards. Players will be rewarded a random instant win of 5x, 10x, 20x, 80x, 500x, or 2000x the bet.

When 2 ticket scatters land, the Lucky Respin is triggered. This allows the reel without a scatter to spin again in the hope of landing another scatter. If 3 ticket scatters land at the same time, the Free Spins round is triggered. In this round, winning combinations with mixed contestant symbols can also trigger the Candy Splash feature. Free Spins can be retriggered up to 5 times!

At the end of every free spin session, the Jelly Juggle Delight feature allows players to choose 1 of 3 options for the chance to win a x2 multiplier for the total amount won during free spins.

Candy Island Princess is a classic fruit machine that’s disguised as an anime display. Still, the slot has a few tricks up its sleeves, and despite the lack of wilds, players have some features to look forward to. The maximum win of the game is 2,200x the bet, a perfectly suitable amount for a fruit machine.