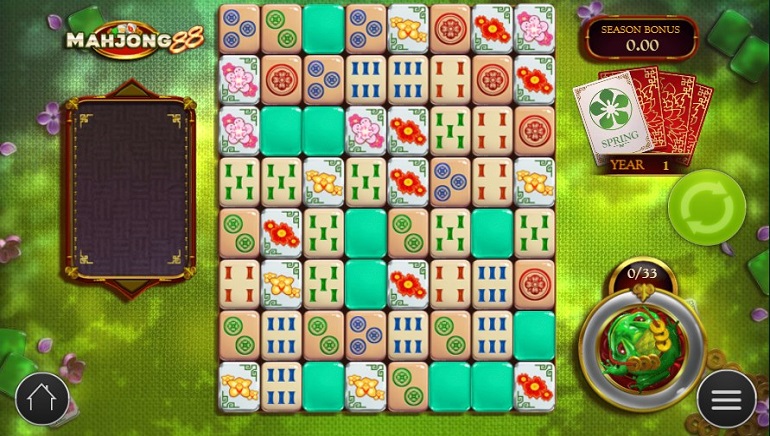 Mahjong 88 is a video slot based on the cluster pays system and themed after a popular 19th century tile game that has seen a number of electronic iterations over the years.

With one of their newest releases, named Mahjong 88, Play'n GO brings to life a popular 19th century tile game. The game has seen many variations over the years and it's been made available for play in numerous electronic iterations but Play'n GO has gone a step further and created a casino slot featuring this well-known theme.

Mahjong 88 is the first slot from Play'n GO to feature a 8x8 grid, so it represents a milestone of sorts for the company. The game features the cluster pays system, with symbols paying when they appear in clusters of at least four.

Talking about symbols, players familiar with Mahjong will certainly recognize various tiles with dice-like numbers and various colorful flowers. Despite being a new release, this slot has managed to preserve the original classic feel of this old tile game.

Once a winning combination is formed, the symbols are removed from the grid but instead of new ones cascading onto the reels, they're uncovered from fresh tiles, which turn over to reveal what's hidden on the other side.

The game comes rich in features and with the gameplay that keeps the players' interest. The play is divided into four seasons and each season brings its own type of wilds (random, sticky, destroying adjacent symbols, etc.). Upon completing a season, players are awarded the Season Bonus, which grows with every win.

The Mahjong Meter located to the right of the grid is filled every time there is a winning combination. A total of 33 tiles needs to be matched for one of four Fortune Frog features to be activated, namely spawn, croak, tongue, and hop.

Play'n GO's Mahjong 88 is definitely an entertaining and different game that could capture attention of the players. With an exciting gameplay and plenty of features, there is something always happening on the reels, which is exactly what most players are looking for in slots these days.