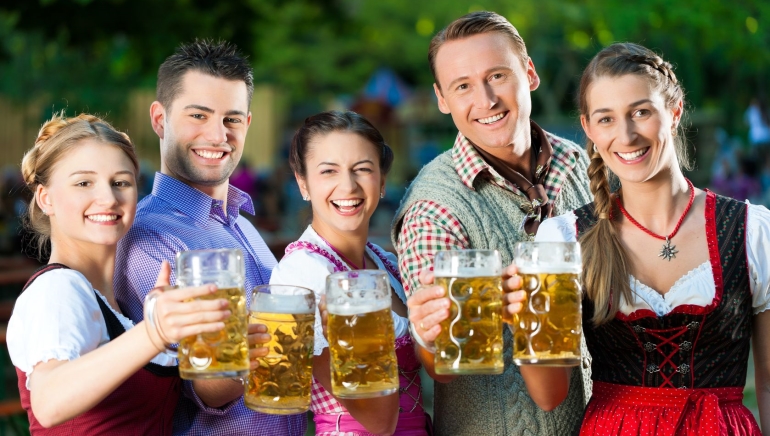 Oktoberfest is just around the corner so we're bringing you some of the best casino slots celebrating this traditional festival of good beer and great fun.

Oktoberfest, the biggest festival of beer in the world, is just around the corner. This is a great opportunity for all beer lovers to have some fun and try different types of their favorite choice of beverage. However, if traveling to Germany and experiencing the joys of Oktoberfest isn't an option for whatever reason (or if you want to get in the right mood for the festivities), there is a way to get the taste of real thing without having to even leave your home.

Of course, we're talking about Oktoberfest-themed slots! Although pints on the reels may not be as good as the real thing, they'll definitely get your juices flowing.

Oktoberfest Spins by Random Logic transports players straight to the heart of the action - Munich during Oktoberfest celebrations. With 25 paylines, reels filled with symbols such as beer kegs, bottles, steins, and mugs, as well as traditional German music in the background, this game is an excellent choice for all beer-lovers out there. Bonus features such as Refills only add to the excitement, as does the possibility of randomly winning a progressive jackpot. Find it at 888 Casino.

Another game inspired by the beer festival, Oktoberfest from Nolimit City is an entertaining slot with a number of random features to keep you on the edge of your seat. The game comes packed with symbols such as beer mugs (scatters), accordions, traditional German hats, horns, sausages, and beer kegs. Gretchen and Hansi are two main characters also appearing on the reels and leading players through the game. The main bonus is triggered by landing three scatters, awarding free Beer spins with multipliers, while Party Spins can be triggered on any individual spin, super-stacking the reels with one of the Fest symbols.

Amaya pays tribute to the great German festival with the Oktoberfest slot coming from their own workshop as well. This one features cartoonish graphics and just 9 paylines, but if you're a fan of the festival (or beer in general), you're probably going to love it just the same. The game's main bonus feature is the Beer Barrel Bonus, where players need to choose from 12 different barrels to reveal their wins. If you're lucky enough to reveal the 'Collect' barrel on your first spin, you'll receive the maximum bonus multiplier straight away..

The Heidi's Bier Haus slot from WMS brings all the magic of Bavaria straight onto the reels. This 50-payline slot features all the symbols one would expect to find in a game celebrating beer and Oktoberfest - steins, pretzels, green hats with feathers, horns, and accordions, as well as two main characters, Hans and Heidi, who will play your hosts. The game comes packed with many features and several jackpots up for grabs.

The latest of Oktoberfest-themed slots to hit the virtual shelves, Wunderfest Deluxe by Booming Games is a colorful video slot featuring 25 paylines across 5 reels. The game hosts similar symbols found in the rest of these games, bonus free spins, and multiplying vertical paylines. Traditional music playing in the background definitely adds to the overall mood of the game as well.