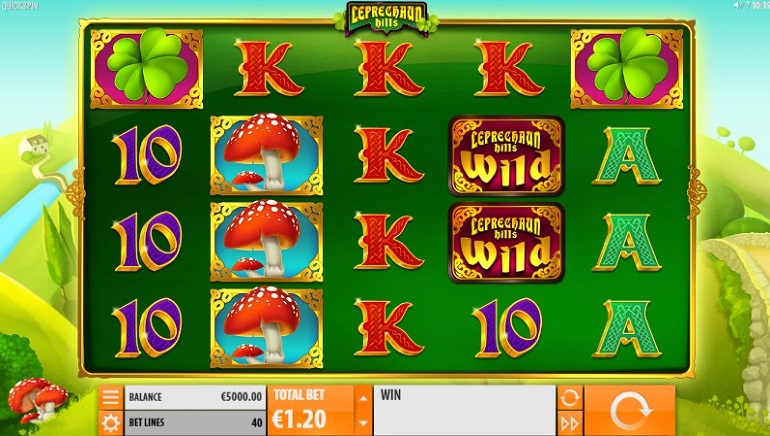 Leprechaun Hills is the lastest slot from Quickspin, and it's an Irish themed game that's been released just in time for St Patrick's Day.

Timed to coincide with St Patrick's Day, online games developer Quickspin has announced the release of their latest game, the Irish-themed Leprechaun Hills.

Filled with images such as lucky clover, rainbows, pots of gold, mushrooms and a certain dark-coloured beer, it comes with free spins, re-spins and stacked symbols that ensure players won't be needing that famous Irish luck to land some winning spins.

Laid out in a classic 5 reel format with symbols arranged over 4 rows, this game has 40 lines to play, and it's now available at Quickspin powered casinos on desktop PC's and mobile devices. Expect to find the game at Quickspin casinos like Video Slots Casino, Casumo Casino and the newly-launched Larry Casino.

While the playing card symbols have all been given a Celtic makeover, it's the pictures that are worth more, and with many of them being stacked on the reels, it's easier to land those all-important winning combinations. There's a couple of bonus symbols to start some additional features, with the Lucky Respins seeing the triggering symbol filling the reels for the potential of some big wins.

A Rainbow Free Spins round starts when the pot of gold appears in any 3 or more places at once, with random symbols being turned into higher value icons throughout.

Commenting on the new release, Daniel Lindberg, the CEO of Quickspin, said: “Leprechaun Hills is perhaps our most entertaining and colourful game to date. It is a great theme, which will resonate with players the world over.

“This is backed up with intelligent math that delivers an immersive and engaging experience, boosted further by the chance for players to win big via the bonus features built into the slot.

“We can’t wait to roll-out Leprechaun Hills with our operator partners, and to see if the luck of the Irish rubs off on their players.”

Based in Sweden, Quickspin was founded in 2011 and in 2016 was acquired by Playtech, bringing their games to a much wider audience.