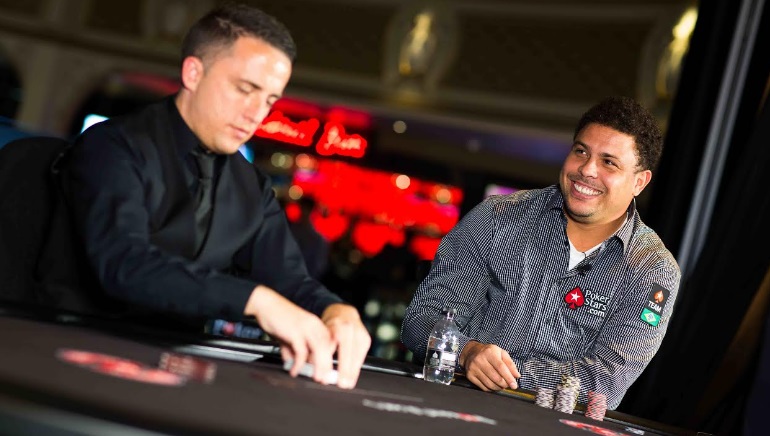 Rafael Nadal has beaten Brazil's legendary past footballer Ronaldo in a poker game once again. London's landmark Hippodrome Casino was the venue for the colorful meeting between the two sporting legends on Tuesday night, a charity poker game organized by major online poker room PokerStars.

The duel was a rematch after Nadal accepted a challenge by Ronaldo in September. The two met for the first time last December in Prague, part of the European Poker Tour Prague Charity Challenge. This game saw Nadal beating not only Ronaldo but also Daniel Negreanu, one of the world's top poker players.

Following a quick 20 minutes session, the Spanish 14-time Grand Slam champion got the upper hand in the game and won the $50,000 prize which will go to the Rafa Nadal Foundation for children and teenagers at risk. Following the game the dominating Nadal said: "It was close for most of the match and I’m delighted to have won. I called all-in at the final hand, which proved to be a good move! Ronaldo is a football great and it’s amazing for me to have the opportunity to face him at the poker table. I’m happy for a rematch if Ronaldo is up to the challenge".

Nadal also spoke about the similarities between poker and tennis: "In poker, you need self-control, the ability to analyse your opponent and read the game to know when to go for it, a strategy that is not too dissimilar to tennis."

Ronaldo took the loss in a sportive manner, praising Nadal's game and analysing his mistake of going all-in at the end with a bluff. "Sometimes you have to be bold in poker, and even though it didn’t work out this time, I had fun" concluded the Brazilian legend. While Ronaldo did not reply to Nadal's mention of another rematch, he did say that he would like to play against his fellow countryman and footballer Neymar.