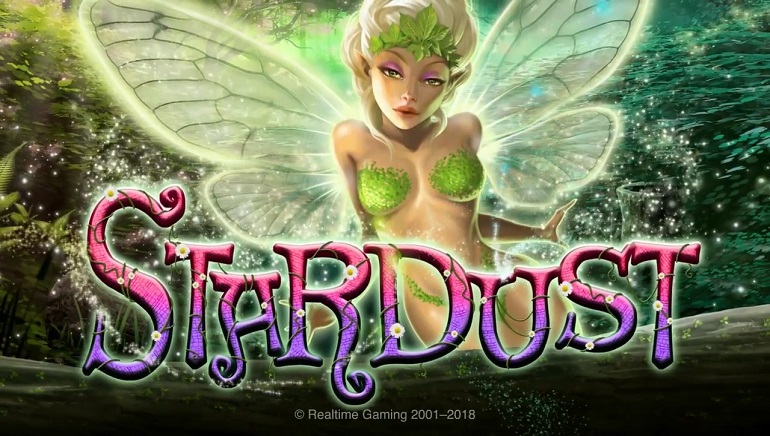 Stardust is the latest video slot game by RTG Asia. This 5-reel, 3 row, 243 ways to win slot game is peppered with magical elements!

Developed by RealTime Gaming Asia, Stardust takes players on a journey deep into an enchanted forest. This mystical realm is filled with wild fairies and their extraordinary abilities. Clad in nothing but fairy dust and magical wings, these fairies enjoy playing in the grapevines and willow trees. They have befriended the cute little bugs in their habitat, and they remain within a realm surrounded by a Forbidden Wall. But alas, a fairy named Stardust could not resist the temptation. She flew over the wall, in search of butterflies only to find herself hopelessly lost in a foreboding forest.

Beware the Evil Queen within The Dark Forest

Stardust slot game is more than a spin and win attraction; it's an adventure-laden story filled with lore. Unfortunately for the little fairy named Stardust, the forbidden Forest is controlled by an Evil Queen. With her youthful looks fading fast, she is desperate to catch a fairy and devour its pure heart. Like the fairies on the other side of the Forbidden Wall, she was unable to broach the barrier. But now, with Stardust in her dark realm, it's game on. She summoned her black crows to bring Stardust to her, and the naive Stardust willingly follows them back to the Queen.

Stardust knew that imminent danger was at hand, with the Queen gearing up to cut the little fairiy’s heart out. Fortunately, Stardust has magical powers, and this is evident in this exciting video slot game. With newfound resolve, Stardust summons the strength from within and turns into a powerful blue fairy who can knock the Queen down with unbridled strength. As a blue fairy, Stardust has 4 times as much flying power to zip across the screen, up the trees, and over the wall to find a way home. These hidden powers are only revealed when she feels threatened. Stardust tells the other fairies about their innate strengths, and cautions them against going over the Forbidden Wall into the Evil Queen's realm.

Stardust slot rewards players with 4X prizes when she turns blue, and when 3 Scatter symbols appear, players get to enjoy 50 free spins. Another exciting feature of the game is the Lucky Feature with 5 reels turning wild and up to 2,000 X the bet level up for grabs. This entertaining slot machine game from RTG Asia has a rich history which players truly love. The game plays out beautifully with feature-rich elements, fabulous artistic renderings of fairies, and an enchanted forest beyond compare.