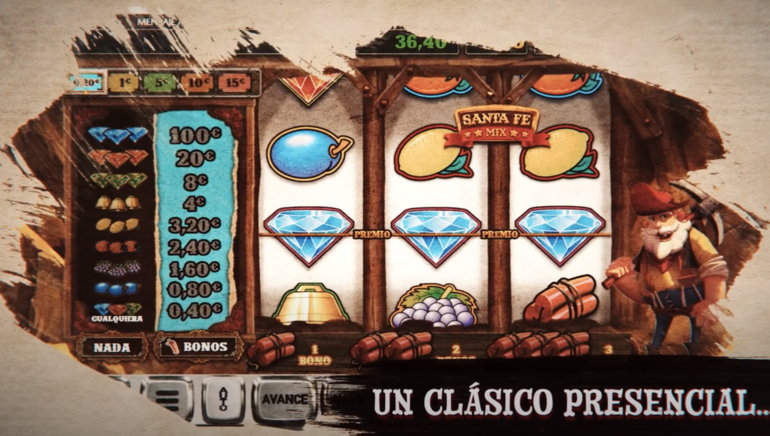 Santa Fe Mix of land-based casino fame now debuts online in a first for Spanish online casinos. Thanks to Recreativos Franco and MGA Games, a bold new adventure is about to hit gaming screens across the country!

Santa Fe Mix is a gold-digging classic fruit with plenty of appeal for fans of the genre. It features three spinning reels and three paylines with low-stakes betting options for casual players—a combination of fruity symbols and gemstones fill the reels in varying combinations. In addition, players can enjoy the Santa Fe Mix slot machine game on PC, Mac, Android, and iOS devices.

In this retro-style fruit slot, players will embark on a 'La Fiebre Del Oro' adventure, a.k.a. Gold Rush. The game's star is a rugged old hillbilly with a pickaxe in hand. Plus, there are also Four Mini Games in Santa Fe Mix. Watch as the bearded digger clad in his dungarees gets down in the mines. There are multipliers and plenty of generous awards in the mines; players simply have to unearth them on the reels.

One of the leading online gaming developers in Spain, MGA Games, has teamed up with the creator of Santa Fe Mix, Grupo Recreativos Franco, to release this iconic slot game in a digital format. That this has been accomplished with the self-same style, charisma, and feel of the original land-based slot is quite the achievement. The classic slot machine game has successfully transitioned from the bricks-and-mortar arena to the online casino realm.

Fans of the traditional game will recognize the sounds, voices, and overall feel of the digital version. Plus, there are many new features included in the online version of the Santa Fe Mix slot game. Nowhere is this more evident than in the mobile gaming version of the slot. It runs directly off the browser – no download required. Optimal gameplay is assured, courtesy of MGA Games' mobile-friendly software. When this game premiered on PokerStars on Monday, March 7 2022, it was billed as the Game of the Week for two weeks straight.

This adventure through a gold-filled landscape is brimming with winning possibilities. Watch as the miner and his donkey work in the blistering hot desert sun to dig up gold, diamonds, and other precious gemstones. You'll see plenty of familiar symbols on the screen, such as dynamite, horseshoes, pickaxes, gold, etc. The minecarts are stocked up with precious metals, and there are nuggets of gold as far as the eye can see, with safes and wanted posters too.

This collaboration between Recreativos Franco Digital and MGA Games is the first of many new games to be delivered. These two companies have agreed upon six new casino games that will transition from bricks and mortar casinos to digital casinos. Expect to see titles such as Burlesque, RF Angels, Bowling, and Gnomes shortly. This great new game hit the Spanish market on Monday, March 28, 2022, and is expected to reel in the crowds with lots of fabulous winning potential.

MGA games have been leading the development of the gaming sector across many different tiers, including localized gaming, and large-scale productions for online casinos throughout Spain. It's also a dominant force in South America and across Europe. Thanks to its expansive collection of productions MGA Games boasts a complete library of games spanning the full spectrum. There are now some 100+ casino titles in its collection. These games are expertly designed and ready to entertain online casino players.