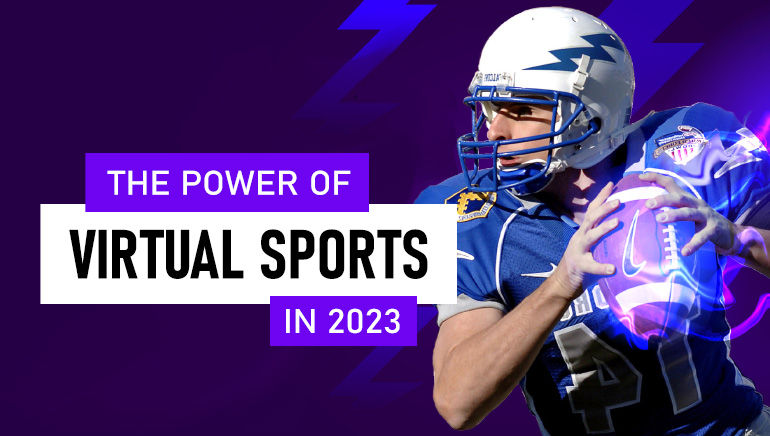 What do you do when your favourite sports season closes, and you don't want to bet on other markets? Join us as we take a look at virtual sports games and how they can help fill the gap in your online gambling calendar.

When it comes to backing your favourite sports team, nothing beats being able to put your money where your mouth is by taking a little action on the side. The FIFA World Cup in Qatar was a prime example of where pundits predicted close to $2 billion in wagers even before the event began.

Most big-ticket betting moved to the NFL with the World Cup's end. As the football season begins to wind down, fans have been treated to some breath-taking action, including one of the most dramatic turnarounds in sports history.

Jaguar fans had all but called the game when their team found themselves down 27-0 deep in the second quarter. But four incredible Trevor Lawrence interceptions later, it would be LA Charger fans shaking their heads in disbelief as the Jaguars claimed an astounding 31-30 victory.

Time and Tide Wait for No One

The online betting community’s biggest challenge is that no matter how incredibly your team performs, it can last as long as the season does.

While the big global soccer betting drive has slowed since the World Cup ended, it is still a hot ticket event across Europe, Africa and Australasia. However, the Premier League, sports mostly highly regarded division, draws to a close in May 2023.

The same is true for the NFL. The 2022/23 regular season ended on January 9th, and now all that is left are the playoffs, with the final championship game of the Super Bowl scheduled to be played at the State Farm Stadium on February 12th.

The question that arises when the sporting event you are most passionate about, whose stats and strategies you eat, sleep, and breathe, comes to an end is: "What now?"

The answer seems simple for the casual bettor and casual sports fan: move on to the next sport and wager on whatever market offers the best odds.

A game category that has existed at online casinos and betting shops for ages now is Virtual Sports. With the mindblowing acceleration in 3D rendering, character animations, the mapping of well-known sports stadiums and high-fidelity audio, these games are increasing in popularity with sports fans looking to bet on specific events out of season.

As virtual sports grow in popularity, the developers in this niche market have been able to enter into licensing agreements with top-rated teams and leagues to bring detailed models of world-renowned sports stars into their games.

This allows punters to back their home teams, populated with the actual players from the current league roster and not a series of lookalikes with no names and blurry player numbers. This added layer of reality deepens the immersion and allows a true fan to forget for a moment that the season is on break and cheer their team on to victory.

During the recent pandemic, the Virtual Sports arena significantly buoyed the traditional sports betting market. With the ban on public gatherings and all sports events drawn to a close, the digital sports betting market became a channel for licensed leagues to keep fans engaged and generate revenue during a time when it was possible in the real world.

The UK's Virtual Grand National event is the most notable of these real-world virtual-world crossovers. The inaugural 2018 event blended “superb CGI animation, artificial intelligence, and Algorithms” to predict the winner of the actual Grand National. During the pandemic, it became a standalone event which replaced the traditional racing event due to lockdowns.

Motorsports fans were treated to a similarly engaging event in 2021 when real-world drivers went head-to-head on virtual racetracks during the F1 Esports Virtual British Grand Prix. Rather than relying purely on statistical data, as with the horses, this event brought the drivers' skills into a digital environment. Fans got to see world-class competitors prove that it was the driver and not the car as they battled for pole position sitting in the cockpit of a racing sim.

Even the greyhound racing community in the United States got into the virtual action, with the Palm Beach Kennel Club working with Virtual Live Racing to create a series of digitised races. The events featured the league’s current roster of canines and offered an immersive animal-friendly experience.

The Upside to Betting on Virtual Sports

In addition to being able to bet on your favourite markets all year round, we have found virtual sports betting to be incredibly time efficient. One of the downsides of real-world betting is creating a parlay today that will only see its final result days or weeks later. On the flip side, digital events take place every four minutes, in some cases even sooner, depending on the type of event.

Getting in on the action is as simple as:

The operator can offer a faster-pace experience thanks to the results of each event being decided by a random number generator (RNG). While soccer games will still have two halves, set pieces like corner kicks and penalties, and even run into overtime, it can all be done within 3-4 minutes rather than the 90+ minutes a live soccer game takes.

The developers of virtual competitive games have ensured that they are optimised for all current mobile devices allowing punters to take action whenever and wherever they like. The combination of all-year-round betting, faster results, and mobile optimisation makes virtual sports the perfect companion to any betting market.