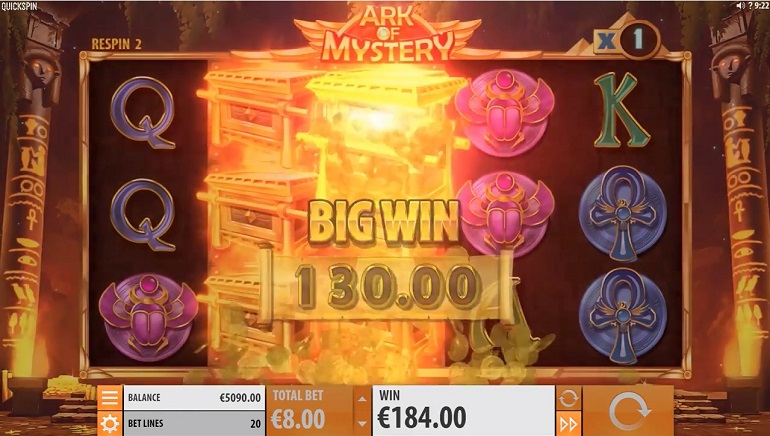 Ancient Egypt-themed slot games never get old, especially when they’re done by Quickspin. One of the developer's newest slots, Ark of Mystery, takes players on an Indiana Jones-like adventure that can lead to a max win of 6509x the original stake.

Ancient Egypt-themed slot games never get old, especially when they’re done by Quickspin. One of the developer's newest slots, Ark of Mystery, takes players on an Indiana Jones-like adventure, only the star of this treasure hunt is Anna, who is out to unlock the lost riches of the Pharaohs. The 2 main features of the slot are Wild Ark Respins and the Multiplier Boosters, which can lead to a maximum win of 6,509x your stake.

When a wild Ark lands on any of the middle 3 reels, the Wild Ark Respin feature is triggered. During this feature, all wilds lock in position and you are awarded a free respin. When each respin starts, the wild symbols expand to an open adjacent position on the same reel. You can continue to get respins as long as adjacent positions remain open, for a maximum of 6 respins with 3 fully wild reels.

Another sought-after feature is the Multiplier Booster, which is triggered when the pyramid symbol lands on reel 5. Each pyramid symbol increases the multiplier by 1, and you can use the respins to get a 22x multiplier applied to your winnings. In total, you can win up to 6,509x your original stake.

Yes, there are plenty of Ancient Egypt-themed slots out there, but Ark of Mystery is one of the better ones. Its intriguing, crisp graphics and soundtrack are perfectly on par with the theme, and its 2 main features provide plenty of medium to high variance action.

You can play Ark of Mystery at Quickspin casinos, online or on mobile.