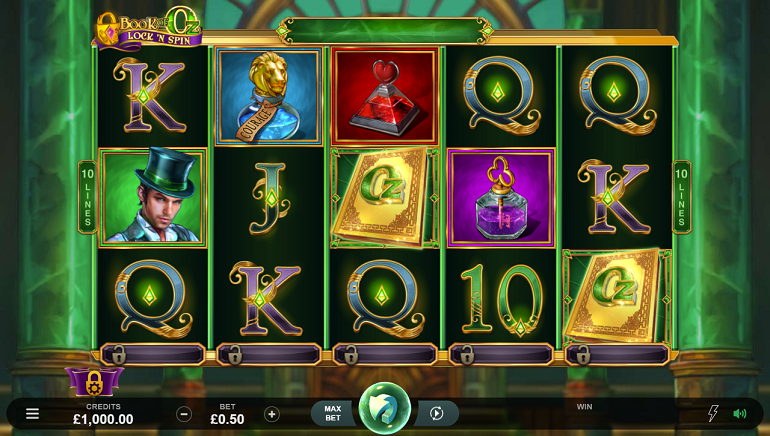 Book of Oz Lock ‘N Spin from Microgaming and Triple Edge Studios includes a new Lock 'N Spin feature, a Free Spins round, and a max win of 5000x a spin.

Book of Oz Lock N’ Spin from Microgaming and Triple Edge Studios is the follow-up to the popular original, Book of Oz. The sequel is pretty much the same as the first, but with the Lock ‘N Spin feature, which certainly adds a splash of excitement. In any case, Microgaming slots are known for their high-quality, and this one doesn’t disappoint. The eery music and emerald background are perfectly suited for the Wizard of Oz theme, but it’s the Lock 'N Spin and Free Spins rounds that will really make players take notice.

Reel symbols include A, K, Q, and J royals, 3 different potions, and a young wizard with a top hat. The latter is the most rewarding symbol and grants 500x the player’s stake when 5 land in combination. There’s also a Book of Oz symbol that acts as both the wild and scatter.

During the Lock ‘N Spin feature, players choose 4 reels to remain locked in place. Each reel costs a different amount, which is shown near the left-hand corner of the reels. There’s also a Hyperspin option that allows players to pay money in order to lock certain reels and respin others.

When 3 or more scatters land on the reels, the Free Spins with a Second Chance feature is triggered. Players will get 10, 12, or 25 free spins along with multipliers of 2, 20, or 200x their stake. A random symbol is chosen as the special symbol, which will expand on each reel to cover it entirely. The Second Chance gives players an extra chance to reshuffle and get a different special symbol, but the risk is that they may get an even worse symbol than the first. The Free Spins round can be retriggered by more scatters landing on the reels for a maximum of 50 free spins.

In truth, it would have been nice if Microgaming and Triple Edge Studios would have changed something in the basic slot set up. Yes, the addition of the Lock ‘N Spin feature certainly changes it up a bit, but seriously, the slots are nearly identical. Other than that, Book of Oz Lock ‘N Spin is a solid slot with a max win of 5000x a spin. It may be more suited for risk-takers due to its high variance, but lovers of the Wizard of Oz may also be tempted to take this slot for a spin, risk-taker or not.