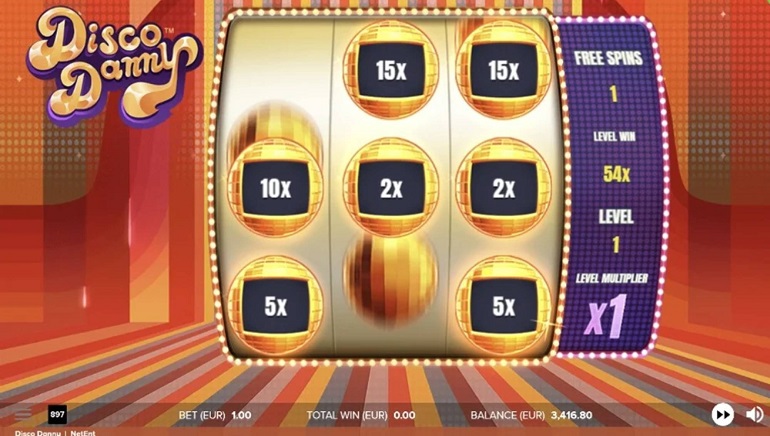 Disco Danny is a simple yet funky slot from NetEnt that will appeal to players who love basic gaming. The layout is simple but the theme, particularly the groovy music, drives the game forward.

Disco Danny from NetEnt is a 70s, disco-themed slot with a beat that will make it hard to sit in one place. While the soundtrack is far-out, the slot itself is a simple 3x3 grid. The main action in this game comes when scatters trigger the Free Spins feature. Players can climb up 5 levels and hit a potential multiplier of 50x and a max payout of 3,333x the stake. Disco Danny can be played at NetEnt casinos, online and on mobile.

Symbols include single, double, and triple bars, sevens, roller skates, Disco Danny with sunglasses and Disco Danny dressed as Elvis. In a surprise twist, there are no wilds in this slot, which means that the main action must be unlocked by the scatters. There are 2 scatters in this game: a silver disco ball and a gold one. The gold disco ball awards a random cash prize and also helps unlock the Free Spins feature.

Disco Danny is a simple yet funky slot from NetEnt that will appeal to players who love basic gaming. The layout is simple but the theme, particularly the groovy music, drives the game forward. While the Free Spins round has the potential to yield some fairly good results, the lack of wild in this game is disappointing. Still, the overarching theme is one of fun, and players who have fond memories of their disco days will certainly enjoy it.

Boogie on Down with the Disco Diamonds Slot from Play'n GO