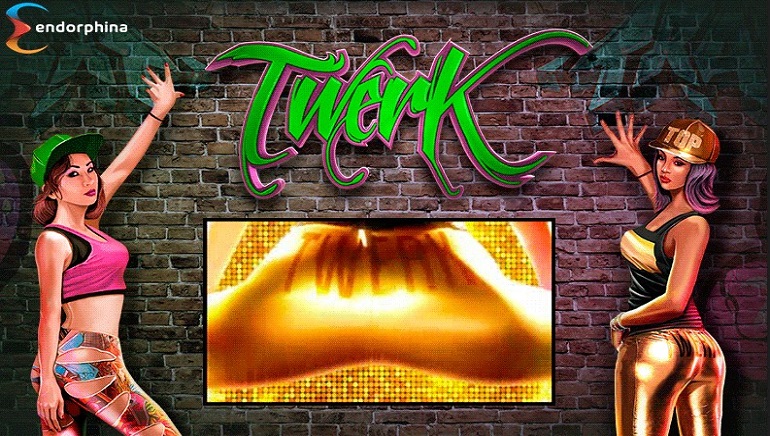 Music and dancing combine to give players an eye-catching slot experience that is based on the twerking phenomenon that has taken the world by storm.

Twerking has firmly established itself in global culture after being brought to the fore by sexy dance moves from music videos. Now, this dance move is intertwined with music genres like pop and hip hop. To honour the movement, Endorphina has created its Twerk slot.

Straight away, Twerk creates an eye-catching experience by displaying an array of glamorous dancers as the symbols of the three-reel slot. Meanwhile, dance tracks are played over the audio of an edgy bar displaying brickwork instead of paint or wall paper.

For years now, five reels has been the dominant format in online slots, but Twerk strips the approach back to only use three reels. But there are still three rows, which means there are nine symbols in total, while there are five paylines.

Players can place wagers on each spin by clicking the up and down arrows that are in the “Total Bet” box. This will enable players to rise from €0.05 all the way up to €500. When staking a wager, players should bear in mind that the five paylines are fixed and they cannot be adjusted. The biggest multiplier comes from the golden symbol with its 500x multiplier.

The headline feature has to be the tournament mode, which is called the Dance Battle Bonus Game. Players can trigger this by spinning the reels until they can land three “VS” scatter symbols anywhere on the screen.

Dance Battle will then start by randomly selecting a dancer to represent the player. The chosen dancer will then take on the other girls, with only dancers appearing as symbols during this stage of the game.

Five rounds will then take place and the winner will be the dancer who created the most winning paylines. All winnings will be awarded to the player, but their experience will end early if their dancer does not progress to the next round.

Twerk is a fun game for players who want a simpler slot game that they can just relax with and only have to cover a few paylines. Also, the Dance Battle Bonus Game can be extremely rewarding if you win a couple of rounds.

Anybody who wants to try Endorphina’s Twerk slot can find it now at BETJOY Casino, Playamo Casino, or Video Slots Casino.