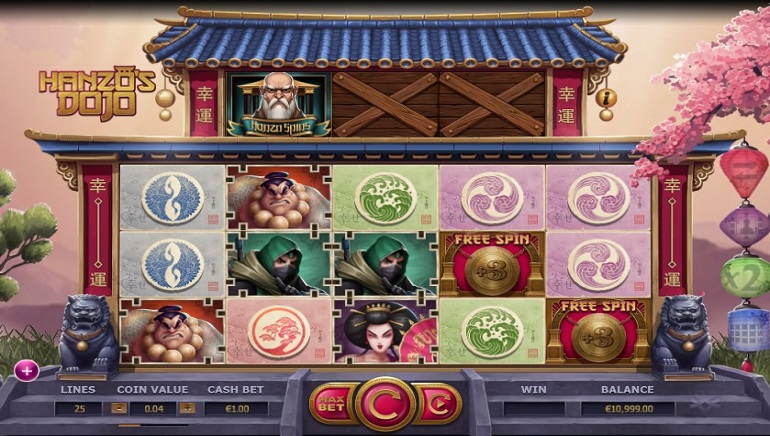 The fiercest fighters in all Japan have come to train under the legendary sensei, Hattori Hanzo, in Yggdrasil’s newest slot, Hanzo’s Dojo. Reel symbols include Asian emblems and various Japanese fighters, including samurai, ninja, fan fighter, and sumo.

The fiercest fighters in all Japan have come to train under the legendary sensei, Hattori Hanzo, in Yggdrasil’s newest slot, Hanzo’s Dojo. In addition to the beautiful graphics that we’ve come to expect from Yggdrasil, there’s some major action in terms of special features, including a rooftop mini slot, expanding wilds, 2 free spin features, and more.

Hanzo’s Dojo is a 5-reel, 3-row, 25-payline slot set against the backdrop of a Japanese temple and bonsai trees. Bets range from 25p to £125 a spin and the RTP is 96.1%. Reel symbols include Asian emblems and various fighters, including samurai, ninja, fan fighter, and sumo. One of the graphic highlights of the slot is when a giant sumo wrestler bangs a gong with his fist after a big win.

The mini slot is triggered when symbols land in the rooftop slot machine above the reels; it features expanding wilds, Hanzo symbols, and free spins symbols. If the free spin symbols land, you can win one of the following prizes: Additional free spins, paylines that work both ways, 3x3 Colossal Symbol nudges, multipliers, and a wild reel.

The Free Spins feature can be triggered when a combination of 3 or more scatter symbols land on the main reel set, both during the base game and during the mini slot. For every scatter that lands, you win 3 free spins. There is also a Dragon Free Spins symbol that reward 4 free spins plus 1 added feature.