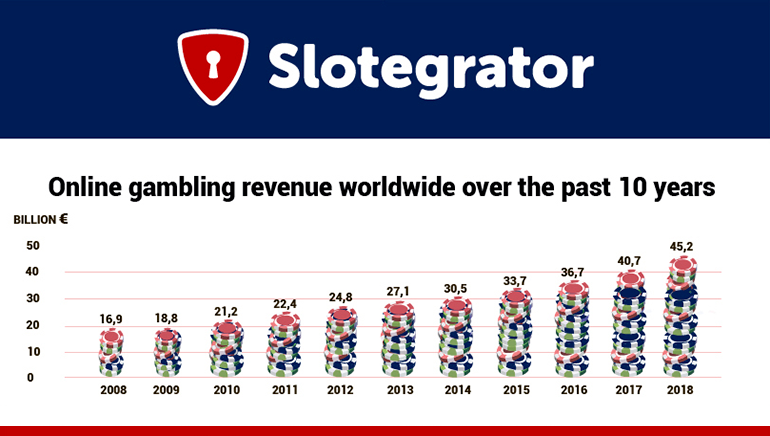 Slotegrator took a close look at the economic and social context in the online gambling market and came up with some interesting figures. The results are delivered in a way that is kind to the eye and those interested can learn a great deal about the current gambling situation at one glance. The numbers are displayed in a concise way and emphasize online gambling income in different regions of the world.

Overall, the numbers are encouraging and it appears that online gambling revenue worldwide has grown over the past 10 years. In 2018, it has surpassed €45 million, an increase of 10% from 2017 and the numbers have grown steadily since 2008. The market volume is also growing at a similar pace of nearly 10%, which is hardly a surprise and today it is on the verge of hitting €52. European players are the ones driving the growth and in the next 3 years, the number of players from this continent is expected to grow.

Online gambling represents today 11.9% of the total gambling market, and the percentage increased every year since 2008. When it comes to the money lost by players, Australians are at the top of the list, followed at a distance by players from Singapore, Ireland, Finland and the United States. Players from Malta and Denmark are at the lower end, with roughly $300 lost by a resident adult per year.

1 in 8 gamblers are younger than 24, but the vast majority are people aged 25-44 which represent nearly half of all players. 24.5% are 25-34-year-olds, while the other 22.8% are people aged between 35 and 44. Slotegrator also posted interesting numbers about gambling addiction, with 1.2% of men and 0.1% of women suffering from it. Canadians are the biggest gamblers, while residents of Norway and the UK play with moderation and are less likely to succumb to this insidious threat.

Half of the gambling revenue comes from betting and 25% from casino games, with poker, bingo, state lottery and other games all in the single-digit areas. The mobile gambling market forecast is optimistic, with €50 billion in 2018 and the numbers are projected to double by 2023 and reach €100 billion.