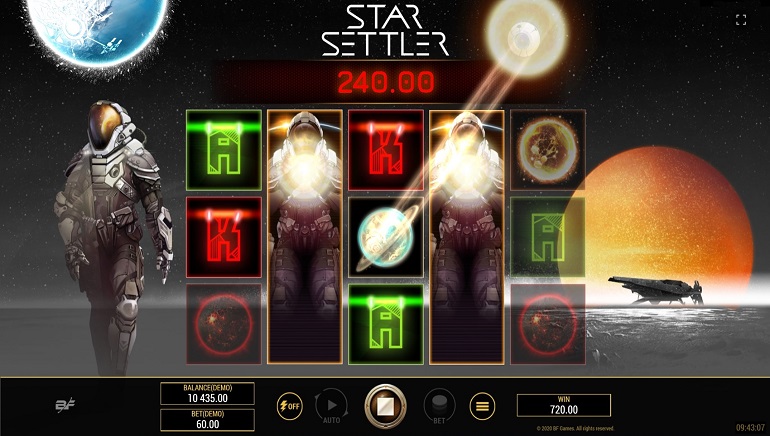 The Star Settler slot is a space-themed game where players will discover free spins and win multipliers of up to 50x their stake.

Head out to the far reaches of the galaxy with the brand-new Star Settler online slot from BF Games. This 5-reel, 20-line game features planets, spacecraft and an explorer on the reels, while the features include a prize-picking round and free spins. Players can blast off with wins equal to 2000x their stake from the desktop and mobile-optimised Star Settler slot.

Realistic images of a settler in his spacesuit, his ship, and colonised planets frame the 5x3 grid of symbols. The high card emblems look suitably futuristic, and join the planets, spacecraft, and settler on the reels. The main character, playing with some kind of golden dice, is a stacked wild symbol who fills whole reels and helps to complete combinations by acting as others if needed.

A red-eyed drone is the scatter symbol of the Star Settler slots game, and it pays 5x, 20x, or 100x the stake when seen in any 3, 4, or 5 places. It's also the trigger for a free spins bonus round, which starts as soon as players pick a drone to discover how many spins will play out. The options range from 5 bonus games to 30, and during the round, special Hot and Cold wilds will appear.

Cold wilds add a 2x2 grid of wild symbols to the reels, while Hot wilds create a diagonal run of 3 wilds in any places.

Join The Journey With BF Games

Star Settler is a medium volatility slot with an average payback percentage of 95.92%. Players can spin the reels for between 0.20 and 200.00 on PCs or mobiles, winning up to 2000x their stake.