Steampunk Goes to Space in Cazino Cosmos Slot from Yggdrasil 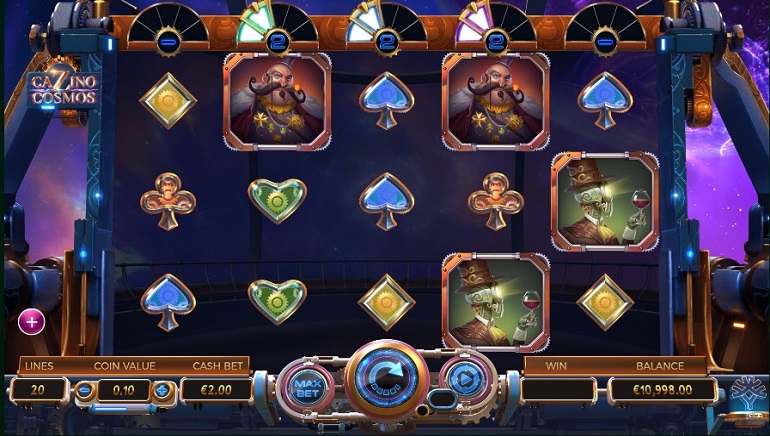 Yggdrasil has released the brand new Cazino Cosmos slot as a January 2019 sequel to the developer’s hit 2015 steampunk game.

Cazino Cosmos is a follow-up to the Cazino Zeppelin slot that was released in 2015 by Yggdrasil Gaming. Once again, players at Yggdrasil casinos will have the chance to play for winnings in a slot that is steeped in steampunk imagery.

Cazino Zeppelin took place in the sky, whereas the Cazino Cosmos slot will offer players the ability to travel into the space with this 2019 release. Another cast of eclectic characters has been put in place as the symbols for this new slot game.

The slot interface is rather typical in that players are faced with five reels and three rows. On top of those, there are 20 fixed paylines that will come into play. When it comes to the coin value, this begins from only €0.005 and can soar right up to €1.00 for a maximum stake of €20.00.

Cazino Cosmos has also created a special feature that is based on players collecting wild symbols. At the start, two collection wilds shall appear above the middle three reels, with progress tracked on light-up gauges of collection wilds.

Each reel has been assigned its own collectible wild symbol. Once the bar is completely illuminated, this will cause the activated reel to provide free spins. Each reel offers different rewards, such as Card Shot Free Spins, Hack Free Spins, Zero Gravity, Mutation, and Expansion.

For clarification, all wilds are sticky within free spins. Moreover, the slot also ensures that that all wilds present when free spins are activated will then be transported straight into the period of free spins that are triggered.