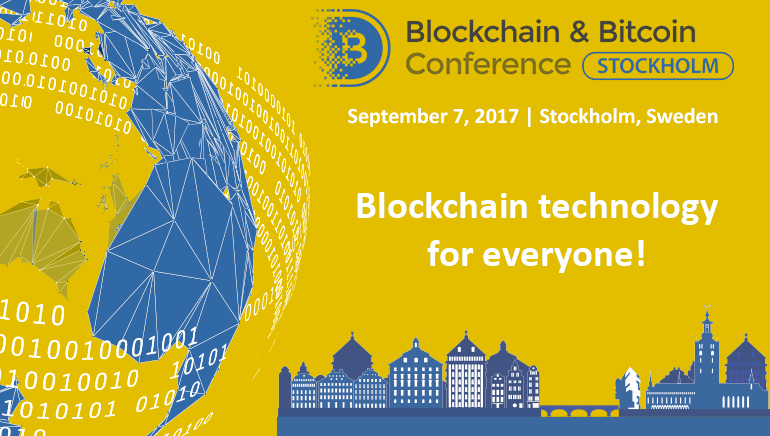 The Blockchain & Bitcoin Conference in Stockholm will focus on the progress and the future of many blockchain-based projects already in motion in Sweden.

For the first time ever, Swedish capital of Stockholm will play a host to the Blockchain & Bitcoin Conference taking place on September 7. This event is a part of a large network of cryptocurrency conferences organized by Smile-Expo, also taking place in Russia, Czech Republic, Ukraine, and Estonia.

Like other conferences that had already taken place or have been announced, the Blockchain & Bitcoin Conference Stockholm will cover many important cryptocurrency topics from different angles. Various panels, speeches, and presentations will touch upon business points, legal considerations, and how modern technologies and decentralized economy can have a positive impact on living standards.

The conference will be attended by a number of key players in the cryptocurrency industry, like Karolina Marzantowich from the Polish branch of IBM, Eric Benz who is Managing Director of Cryptopay, a company dealing with issuing bitcoin debit cards, and Frank Schuil from Safello, a bitcoin exchange.

Strong Support for the Blockchain Technology

The Swedish government strongly supports the blockchain technology. In 2016, there was a state project that tried to digitalize land ownership records using smart contacts and technologies based on the blockchain idea.

In June of this year, another project was launched using blockchain as the foundation. It is ran by government corporation Vattenfall, in conjuction with 20 other European companies, and deals with the energy sector. These companies are using the technology to try and develop a new platform for trading electricity.

These and other similar projects will be discussed during the conference, including the plans of the Swedish Central Bank to develop a national cryptocurrency. This idea has a significant potential, since the number of Swedes using the traditional currency has significantly decreased.

In light of all these facts, Stockholm represents an excellent venue for the Blockchain & Bitcoin Conference, which should produce some very fruitful discussions and concrete results.