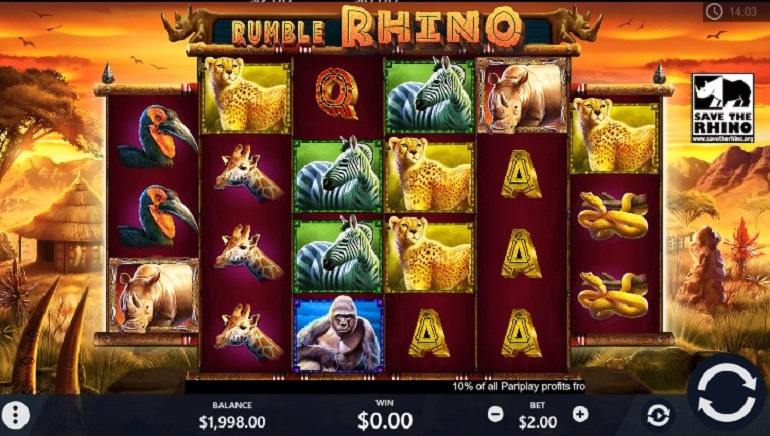 Players choosing Pariplay’s new Rumble Rhino can expect a wonderful gaming experience while contributing to the protection of endangered rhinos.

African themed slots are immensely popular at online casinos, and Pariplay’s new Rumble Rhino slot promises to deliver an amazing gaming experience. The software developer has produced a game that celebrates the beautiful African landscape and the animals roaming freely across the savanna. Just as the name suggests, rhinoceros are at the cornerstone of this game and those who love these majestic animals have another reason to choose the slot: 10% of the profits made from the Rumble Rhino game will be donated to the Save the Rhino International charity that protects endangered rhinos.

A Beautiful and High-Paying Game

Pariplay’s new Rumble Rhino checks all the important boxes, by getting players fully immersed into a gorgeous landscape, while offering a high return to player. Its reels are populated by symbols depicting the animals living in the African savanna, such as zebras, giraffes and the rhino. The slot has a 95.52% RTP and it is translated in 20 languages, so it should appeal to an international audience. Players can spin its reels on mobile devices and the slot can be enjoyed in the browser without the need to download it.

The game itself is rich in special features, with instant win prizes, plenty of free spins and multipliers that greatly increase regular winnings. This is just one of the many slots developed by Pariplay, a company with a portfolio that exceeds 100 casino games. It is, however, one of the best looking slots celebrating the African rhino and it is certified fair by independent auditors. The software developer itself is licensed in the UK, Malta and the Isle of Man so players who choose their games don’t take any chances.

Do the Right Thing while having Fun

Rumble Rhino is a special slot because it allows players to hit two birds with one stone, each time they spin its reels. That’s because the software developer has pledged to donate 10% of the profits made from this game to the UK registered charity protecting endangered rhinoceros. The foundation raises the funds to protect these magnificent beasts and help increase the rhinoceros numbers in both Africa and Asia.